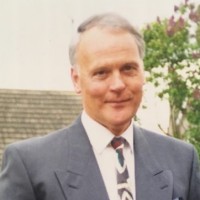 Alastair Fyfe, who had a “long and distinguished career” with the Dundee Courier, has passed away after living with dementia in recent years.

Alastair, pictured, served as second in command at the Courier for five years at the end of his career, before retiring in 2001 at the age of 65.

According to an obituary in the newspaper, he passed away peacefully with wife and childhood sweetheart Norma by his side on Friday at the Cairnie Lodge care home in Arbroath, where he had been living during the last couple of years.

Dundee-born Alastair joined DC Thomson as a reporter soon after leaving school, and also received journalism training in the Royal Air Forces as part of his national service.

With the exception of this, and a short spell at the Daily Express in the early 1960s, Alastair spent his whole career working at the Courier and its sister title the Dundee Evening Telegraph.

At DC Thomson’s Dundee office he served in roles including reporter and chief reporter, once interviewing Margaret Thatcher, before taking on the deputy editor’s job.

Alastair is survived by his wife Norma, daughters Tracey and Sarah, and grandchildren Claire, Scott, Rachel and Nicole.

His funeral will take place in Parkgrove Crematorium, in the Angus village of Friockheim, at 9.30am today.