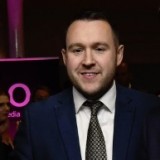 An award-winning deputy editor has left a regional daily for a new job at the university where he trained as a journalist.

Andy Sykes, left, said farewell to The Gazette, Blackpool, on Friday after six and a half years in the deputy editor role.

Today he started work as a part-time journalism lecturer at the University of Central Lancashire, which he graduated from in 2002.

Andy began his career at The Gazette and returned for a second spell with the paper after five years at sister title the Lancashire Post.

He told HTFP: “It’s been an honour and privilege to help lead The Gazette in recent years and I am immensely proud of our achievements, especially this year when we were named the O2 North West Newspaper of the Year and best front page by HoldtheFrontPage.

“It will be a huge wrench to leave The Gazette and while I have had a tremendous time working with a team of unbelievable grafters, it’s the right time for myself and my family to head off to pastures new. I will be working three days a week and spending the other days with my son Charlie as my wife returns to work after maternity leave.

“I have put my heart and soul into The Gazette and LEP during my time in journalism and I have loved every minute of it – not many people can say they interviewed the Cheeky Girls and the Prime Minister on the same day.

“But that is the joy of working in a news patch like Blackpool which has rarely been out of the national news with fracking and the shenanigans at Blackpool Football Club in recent years. And I would like to think we have stood up for the town, when others chose not to, and resolutely held our elected officials to account.”

In his first spell with The Gazette, which he joined as a trainee after university, Andy’s roles included education writer and deputy news editor.

At the Preston-based Post, where he worked from 2007 to 2012, he served as weekend news editor and then online editor.

Andy added: “I have been fortunate to work under many great editors, Neil Hepburn, Simon Reynolds, David Helliwell, Jon Rhodes and latterly Gillian Parkinson – who in particular has been a great sounding board and guiding hand despite her own incredible workload.

“But I will cherish our coverage of Jimmy Armfield most of all, both following his death last year and our one year on 10-page special, which is published on Tuesday.

“Local newspapers have the power to be ambassadors for their towns and cities and the people within them and set the tone, especially in this digital age.

“There are many challenges ahead for the regional media but I am convinced The Gazette is as well placed as any to ride the waves that may come. Thank you to everyone who has helped me along the way – it’s been a blast.”