The Dundee Evening Telegraph’s ‘Axe The Shower Tax’ bid prompted Dundee City Council to remove a shower charge which was costing disabled older people as much as £10-a-week to shower in their authority-run properties.

The charge was brought into force in 2007 when showers were installed in the council homes of people who required them because of a disability, but the Evening Telegraph launched its campaign earlier this year after Dundee Pensioners’ Forum raised the issue at a council meeting.

The council confirmed last month the charged would be scrapped, and now MSPs have praised the newspaper’s work with a motion at the Scottish Parliament. 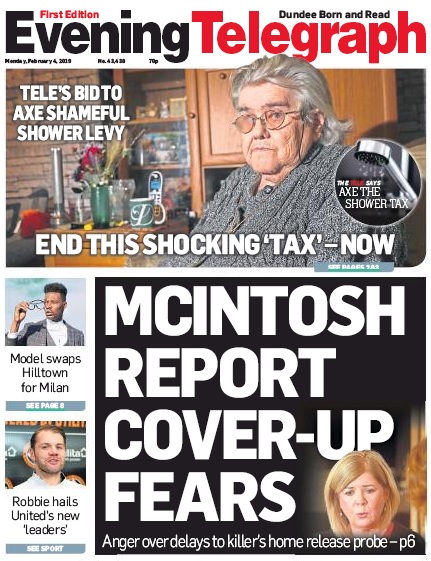 The Telegraph launched the campaign earlier this year

The motion by Scottish Conservative MSP Bill Bowman calls for his colleagues to “welcome the news that Dundee’s Evening Telegraph has been successful with its campaign to cancel shower subscriptions that were charged to council housing residents in the city”.

It goes on to recognise that the paper “has been at the forefront of local journalism, campaigning in the city for more than 140 years”, and calls on MSPs to wish the paper “”many more years of staying ‘Dundee born and read’”.

Telegraph editor Dave Lord said: “This is a fantastic victory which will make a real and meaningful difference to some of our city’s most vulnerable residents.

“I am delighted that council chiefs have heeded our calls to see this manifestly unfair charge scrapped.

“This is a great result for the people of Dundee and proves that people power can lead to change.

“I am proud that the Evening Telegraph campaigned so hard on this issue.”