A regional daily has said farewell to a football legend and “friend to journalists” with a special tribute edition.

The Sentinel, Stoke, ran a front-page wraparound yesterday after covering the funeral of Gordon Banks, England’s only World Cup winning goalkeeper to date.

Mr Banks was a well-known celebrity on The Sentinel’s patch who attended all of the newspaper’s annual events such as the Our Heroes Awards and Stoke-on-Trent Sports Awards, where he was the guest of honour and presented prizes.

He had lived in North Staffordshire for more than 50 years, having initially moved there following his transfer from Leicester City to Stoke City in 1967. 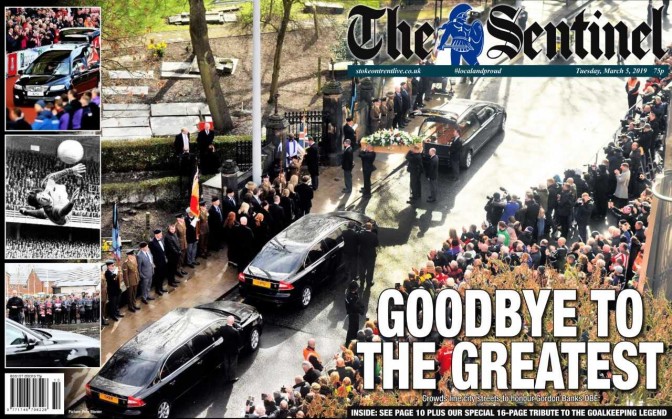 Martin Tideswell, editor of The Sentinel and its Stoke-on-Trent Live sister website, told HTFP: “We were the first media organisation to report Gordon’s death on 12 February and since that moment we have been overwhelmed by the reaction for readers. What has struck us is that so many people had wonderful personal stories to tell about meeting the great man.

“Gordon was a friend to many people, including our journalists, and despite being an iconic English sporting hero, I know that he will remembered locally just as much for his humility, kindness and generosity to his fans of all ages and for his work and contributions to good causes.

“Fortunately, The Sentinel and Stoke-on-Trent Live has been able to fall back on a wealth of material about Gordon in our archive – interviews, images and films that no-one else has – amassed over five decades which has also helped our sister titles, many of whom shared our blog on the day of the funeral.”

Yesterday’s edition contained a 16-page tribute, as did an initial souvenir edition run following the death of Mr Banks.

To date, the story has also driven in excess of 350,000 page views on Stoke-on-Trent Live.

Martin added: “We sold more than 2,500 additional copies of the first souvenir edition of The Sentinel and it has been especially pleasing to speak to members of Gordon’s family who have really appreciated our coverage and bought copies of the paper to save and send to relatives.

“We could never do Gordon justice (and I know that he would shake his head at all the fuss…) but he was a legend who lived among us and we have been at pains to ensure we struck the right tone with our coverage, online and in print, of the passing of man who is so loved in these parts.” 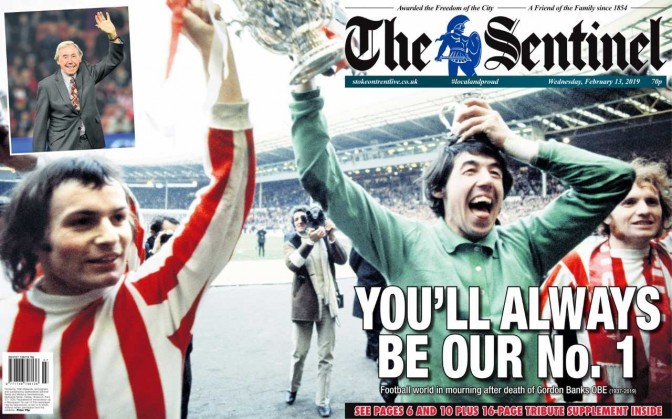