A regional daily has produced a souvenir special to help football fans celebrate being “back where they belong”.

The Birmingham Mail’s ‘Back where we belong’ supplement charts the story behind Aston Villa’s promotion to the Premier League, English football’s top tier.

Villa had spent the past three seasons in the Championship, the nation’s second tier, before defeating Derby County in a play-off final last month.

The 40-page special is priced at £1.50, and is on sale in newsagents and supermarkets around the Birmingham and Black Country. 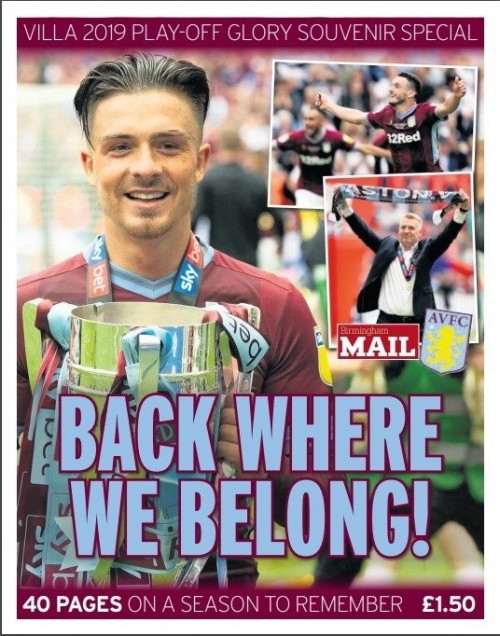 A piece promoting the publication on thew Mail’s Birmingham Live sister website reads: “The 40-page souvenir special celebrates the contributions of manager Dean Smith and captain Jack Grealish, who have shared a joyous joint journey from boyhood fans to claret and blue heroes.

“It includes a month-by-month look (including unpaid tax-bills, cabbages and wonder goals) at the remarkable transformation Villa have experienced on and off the pitch over the most eventful year in the club’s modern history.

“It reflects upon the record-breaking 10-game winning run that proved to be the catalyst for Villa’s timely march into the play-offs – and revisits the dramatic semi-final penalty shootout victory over West Bromwich Albion.

“And, of course, with fan photos, dressing room reaction and our centre poster spread it basks in the glory of that balmy May bank holiday afternoon when Aston Villa announced their return to the top tier of English football.”