A regional daily has won a 19-month-long legal battle to name a paedophile who claimed he and his family would face retribution unless his name was kept secret.

The Bolton News has finally been allowed to name Rocky Knight, who admitted possessing and distributing indecent images of children in July 2017.

But despite his initial admission of guilt, Knight’s identity was kept secret after an order postponing reporting of proceedings after he made claims that he and his family would face retribution from their fellow members of the travelling community.

Judge Richard Gioserano made the order at Bolton Crown Court to give Knight time to produce evidence backing up his claim that he would be at risk if his name was known in connection with such an offence, but after 21 further hearings it has finally been lifted. 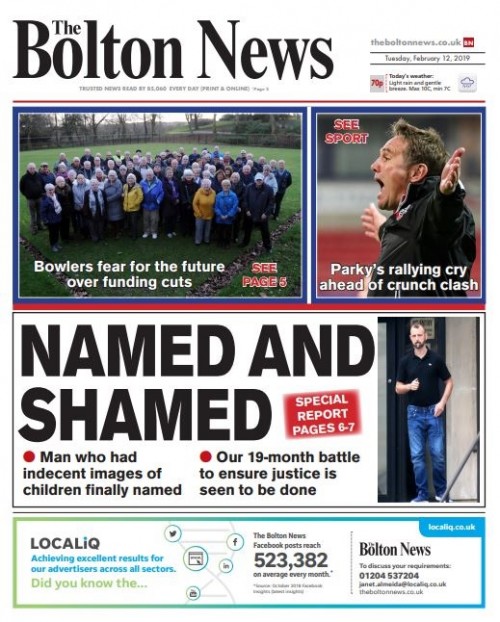 The News splashed on the decision yesterday

Joanne Rowe, court reporter at the News, said: “We have a duty to be the eyes and ears of the public in court, identifying those who are guilty of wrongdoing and it is in the public interest that the principle of open justice is upheld.

“Therefore, it was important that no individual, from any section of society, should be able to keep their crimes secret where others similarly convicted are not afforded such anonymity.”

Judge Gioserano had originally rejected Knight’s application for anonymity, but granted time for him and his defence team to consider appealing his ruling to the High Court and, in the meantime, left the postponement order in place.

No appeal was lodged although Knight’s legal team asked the judge to consider his ruling in light of further evidence.

The judge agreed, but at final hearing on Monday he ruled that Knight’s further assertions about his safety were subjective and could not be objectively verified and so refused to grant him anonymity.

Karl Holbrook, editor of the News, said: “We are delighted that the judge has ruled that Rocky Knight cannot remain anonymous. No one is above the law and it was right and proper that The Bolton News, on behalf of the public, ensured that his conviction is made known.

“We will continue to be vigilant to ensure all cases of public interest are reported fully.

“Knight, who is a member of the traveller community, claimed he would be at risk of being harmed if his identity came to light. But we believe he was merely trying to avoid the inevitable public shame which accompanies convictions for offences involving indecent images of children.”

Knight spent six months in prison on remand for the offences, so Judge Gioserano sentenced him to a community order for 24 months along with 100 hours of unpaid work and 40 days of rehabilitation activities.

In outlining the law explaining his decision to refuse to grant anonymity, Judge Gioserano stated: “A very important aspect of the public interest in the administration of criminal justice is that the identity of those convicted, and sentenced, for criminal offences should not be concealed — some defendants may find that an unpleasant prospect but that is a direct consequence of their offending.”