Daily teams up with university to broadcast live election hustings 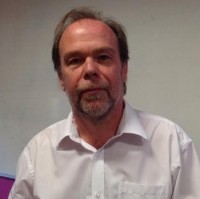 A university has teamed up with a regional daily to broadcast live election hustings from its patch.

Journalism students will be reporting from both hustings, while those studying film and TV will help to run the broadcast, which will be live-streamed from the university’s TV studio to the newspaper’s website.

Mark Waldron, editor of The News, will chair the hustings, with all candidates agreeing to take part.

Ian Tapster, pictured, course leader in journalism at the university, said: “This is an exciting opportunity for the university to team up with The News in hosting these two hustings.

“It’s a great opportunity for our students to be involved in filming and reporting these important debates.”

Students will be producing video reports, audience vox-pops, live-tweets and blogs on the night for the journalism department’s website as well as The News.

Portsmouth South is a Labour-held seat that has changed hands many times in the past two decades, while Portsmouth North is held by the former Defence Secretary Penny Mordaunt.