A regional daily has apologised for some of the wording it used in a report about the far-right leader known as ‘Tommy Robinson’.

The Lancashire Post has admitted it should not have described the low attendance at a protest attended by those opposed to Robinson, whose real name is Stephen Yaxley-Lennon, as “galling” for its organisers.

The admission was made in a piece explaining why the Post had covered a rally attended by Yaxley-Lennon at Preston’s Ashton Park, as well as a counter-protest in the city centre.

It followed criticism of the paper both from those who did not believe the rally should have been reported on at all, as well as from those who disputed the resulting story’s accuracy and tone. 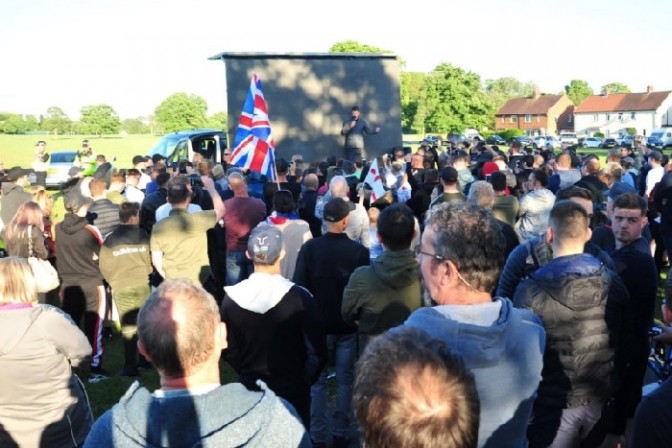 Yaxley-Lennon speaking at the rally

In the piece, published on Friday 24 May, Post communities editor Mike Hill said the paper had received “considerable criticism” since covering the rally, prior to the European elections.

Wrote Mike: “This criticism fell into two distinct categories. Those who believe the Post should not have covered his campaign event at all and those who disputed the accuracy and tone of the article.

“We first became aware of Robinson’s intention to speak in Preston several weeks ago but nothing was a confirmed and so we chose not to publicise it.

“But the decision to send a journalist along to the event was a much easier one to make. Whatever our views of Robinson’s beliefs or policies we could not pretend a public event in a public place was not taking place.”

Mike added: “We have come under fire for not providing reaction from those who stand against Robinson and his views. Our reporter spoke to several people in attendance who oppose his values and not one person would speak on the record. Only one would offer a quote on the condition of anonymity.

“There was, of course, a protest event, but this took place across the city and it would be hard for those not on Ashton Park to react to something they had not witnessed.

“But did we get everything right on Monday night? In a word, no. Many of those complaining were concerned we had overestimated the numbers of people present on Ashton Park. And we should have made it clear that it was an estimate.

“We reported the crowd numbered 600, many of those complaining said it was more like 100. Lancashire Police put the figure at 200.

“This is important as the figure is an indication of Robinson’s popularity every bit as relevant as his claim to have pulled his largest crowd of his campaign in Preston. We also upset people with the suggestion that it must have been ‘galling’ for the organisers of the protest in the city centre to have drawn 40 people.

“It may well have been galling to them – it may well not have been – but that was an opinion and in a factual news report there’s no place for opinion and we apologise for that aberration.”

In the piece, Mike also revealed Yaxley-Lennon had previously turned up at the Post’s office in 2017 to complain about the newspaper describing him as an “extremist”.

He wrote: “We didn’t report this incident in the newspaper or online. People make complaints to the newsroom all of the time. It wasn’t a story then and it isn’t one now.”