A regional daily carried out a joint investigation with the BBC after two reporters realised they were both working on the same story.

The Eastern Daily Press and BBC Look East collaborated on a probe into publicly-funded enterprise agency Norfolk and Waveney Enterprise Services, which paid almost £900,000 to Nautilus Associates, owned by John Balch, who was then NWES strategic director.

Tom Bristow, investigations editor at EDP publisher Archant, first approached the BBC’s Matt Precey about a possible collaboration at the end of last year after realising they were both working on the same story.

Their efforts resulted in a splash for the EDP yesterday, with a four-page special report inside, with the BBC’s story also being published at the same time. 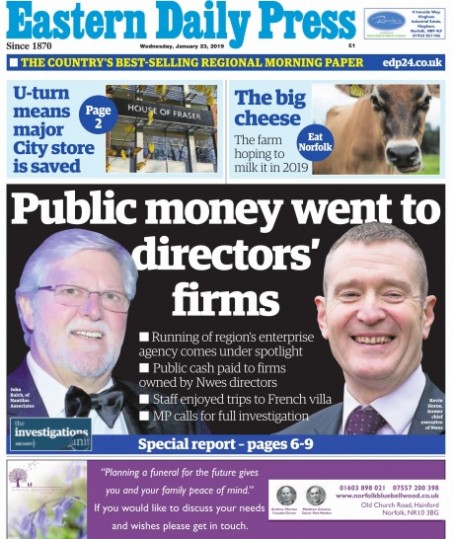 Tom told HTFP: “In the past I’ve found you get far more out of stories by collaborating and it seemed counter-productive to have two journalists in Norwich working on the same story but not speaking to one another.

“I know the BBC has done a lot recently to support local papers so I was confident Matt would get the go-ahead to work with the Eastern Daily Press on this. When we first met, Matt had already been looking at NWES for a few months while I was only just getting started.

“We agreed to share everything we both already had and to save time divided up the jobs which we felt needed doing to stand the story up. For example, one of us would approach someone for comment on behalf of the BBC and Eastern Daily Press. We also agreed to publish at the same time, credit one another and show each other the copy before hand.

“Traditionally local papers are used to being in competition with the BBC, rather than collaborating, but by working this way we both got far more information than we would have done working alone, which made for a much better story.”

Discussing possible future collaborations with the BBC, Tom added: “If the right story comes up then yes, and we’re expecting follow-ups to today’s story.”

Mr Balch and former NWES chief executive Kevin Horne said in a joint statement: “NWES has enjoyed a long relationship with Nautilus who have provided services over 15 years to support the growth of NWES.

“Contracts were tendered where appropriate and often bids were made in partnership. All related party transactions were shown in the accounts. This arrangement was endorsed annually by successive boards of NWES.”