A daily newspaper has pledged to recruit two new journalists once it signs up 7,000 and 9,000 subscribers respectively.

Pro-Scottish independence daily the National has launched a fresh ‘10,000 Steps’ drive to increase the number of readers taking out a subscription, promising to launch a new service for every thousand it takes on.

The National announced on Thursday that it had passed 6,000 subscribers, and that it will produce a new series of monthly supplements targeted at voters in favour of remaining in the United Kingdom as a result.

Once it reaches the 7,000 milestone, the Glasgow-based paper says it will hire a full-time video journalist “to produce viral videos that will be available for all Yes groups and social media users to share”. 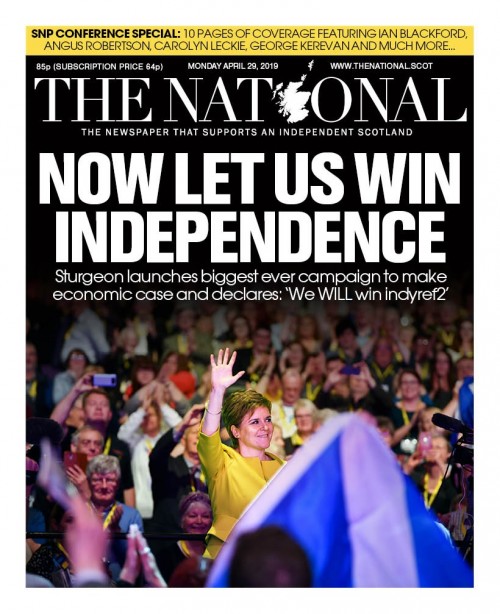 When it hits 8,000 it will launch a “Unionist fact-checking service that examine dodgy claims by politicians (and the media)”, while at 9,000 subscribers a digital journalist will be recruited to work with Yes groups on local stories.

Should it reach the 10,000 mark, The National says it will deliver a free glossy magazine outlining the benefits of independence to every town in Scotland.

A piece explaining the drive states: “We want to achieve 10,000 subscribers as quickly as possible – and for every 1,000 that we sign up we will pledge to invest in the paper and boost the campaign for independence.”

National editor Calum Baird told HTFP: “Our innovative new 10,000 Steps campaign will not only deliver significant numbers of new subscribers to the paper – but it allows us to invest directly in our journalism. If we hit our targets, we’ve pledged to hire new full-time staff members, launch a fact-checking service, and provide various other resources to grow our newsroom and expand our reach.

“Since we launched the initiative less than two weeks ago, we have already signed up more than 600 new subscribers – and that number is increasing every day. The incredible response from our readers shows how much they value investment in editorial – and this is all part of our plan to deliver growth in both digital and print as we gear up to fight a second independence referendum.

“Our print sales are already 8.5pc up in March vs last year, and with digital subscriptions up 30pc and website traffic more than 50% up vs last year, The National is in a strong position to create a successful, sustainable business model in an industry which faces many challenges.”