A daily newspaper which pledged to recruit two new journalists if it signed up 7,000 subscribers is making good on its promise.

Earlier this year pro-Scottish independence daily The National launched a fresh drive to increase the number of readers taking out a subscription, promising to launch a new service for every thousand it takes on.

At the time it pledged that once it reaches the 7,000 milestone, it would hire a full-time video journalist to focus on producing viral vides for “all things indy.”

Now the Newsquest-owned title has announced it has hit the target – and has recruited not one but two new jounalists to work on the video content initiative. 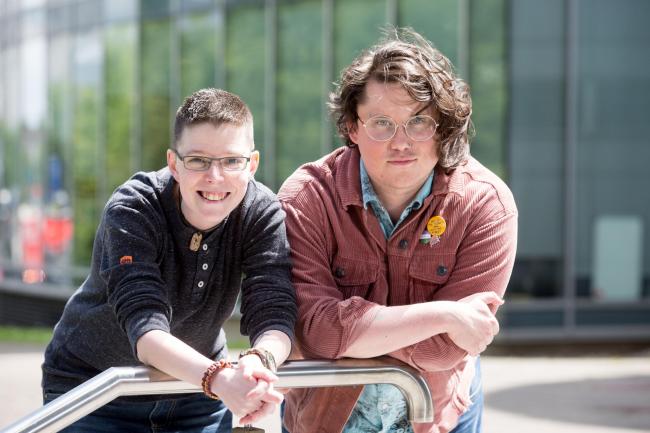 The new dedicated team, made up of Stephen Paton, above right, and Sarah Mackie, were introduced to readers in a story published on Tuesday and started their new roles yesterday.

Sarah, whose satirical politics posts have earned her a cult following from readers while working for the paper in a freelance capacity has now joined the staff along with online content editor Stephen, with the aim of delivering a host of clips every week.

Editor Calum Baird said: “We are aiming for millions of views every month with all types of videos from explainers to rebuttals and commentary, all of which will be designed to advance the cause of independence.

“We believe that there is a big gap for this kind of content in the movement and we intend to fill that gap. The more people that sign up to subscribe, the more we’ll be able to do.”

Sarah, who began contributing clips for The National a short time ago, said she is “overjoyed” to be joining the team on a more formal basis.

She said: “It’s incredible to see the subscription numbers and support for the paper increasing, especially when other papers are starting to slow. It’s been a very positive response.”

Added Stephen: “It’s going to be really exciting to get the chance to do video content around Scottish independence and politics.

“We’ll be making videos that dive into the case for independence as well as trying to take complex issues and make them understandable to everyone. We hope these have a really wide reach and everything we produce will be available for Yes groups to use.”

The paper has previously pledged to continue introducing new services and features each time it adds anoher 1,000 subscribers.

When it hits 8,000 it will launch a “Unionist fact-checking service that examines dodgy claims by politicians”, while should it reach the 10,000 mark, it will deliver a free glossy magazine outlining the benefits of independence to every town in Scotland.