Daily Mail owner ‘frontrunner to buy the i’ say reports 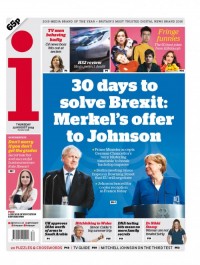 National daily the i looks set to be hived off from the rest of the JPIMedia group with Daily Mail owner DMGT emerging as the “frontrunner” to buy the title, according to latest reports.

JPIMedia’s owners are carrying out an ongoing auction of the regional publisher’s assets after putting the company up for sale in July.

While it is understood that the current JPIMedia management would like to sell the group as a single entity, some of the potential buyers are interested only in particular titles.

DMGT, which exited the regional newspaper sector with the sale of its share in Local World to Trinity Mirror in 2015, is believed to be only bidding for the i while TM successor company Reach has confirmed it is in discussions about acquiring “certain of the assets” of JPI.

Former Local World chairman David Montgomery has also formed a new company, National World, with the aim of building a new publishing group, while Steve Auckland, who was chief executive of LW under David, is also rumoured to be mulling over a bid.

Others involved in the discussions include US-owned publishing giant Newsquest and Belgian media group Mediahuis which bought Belfast Telegraph publisher Independent News and Media in April.

According to a report in The Guardian, DMGT has been asked in for “exclusive talks” with JPIMedia over the possible purchase of the i.

The paper reports that JPIMedia is seeking around £75m for the flagship title which is currently making around £10m in annual profits.

A spokesman for DMGT said: “DMGT regularly assesses market opportunities to take advantage of its scale in business to business information services and consumer media operations.”

DMGT made a previous bid for the i, believed to have been around £25m, when JPIMedia predecessor company Johnston Press was put up for sale last year.

After a brief period in administration, JP was eventually taken over by its debt-holders in a so-called “pre-pack” deal after concluding that none of the bids received for all or part of the company were sufficient to pay-off its £220m debts.

JPIMedia is declining to comment on the ongoing sale process.