A daily newspaper has launched an anti-loneliness campaign after revealing more than 100,000 people on its patch will eat Christmas dinner alone.

The Scotsman is hoping to raise awareness of the issue in the run-up to Christmas Day following research by Age Scotland.

The Edinburgh-based daily aims to support the charity’s work in tackling loneliness, and is encouraging readers to “extend the hand of friendship” to people they believe may be lonely.

It follows the launch of a similar campaign by Age Scotland and Age UK entitled ‘No One Should Have No One.’ 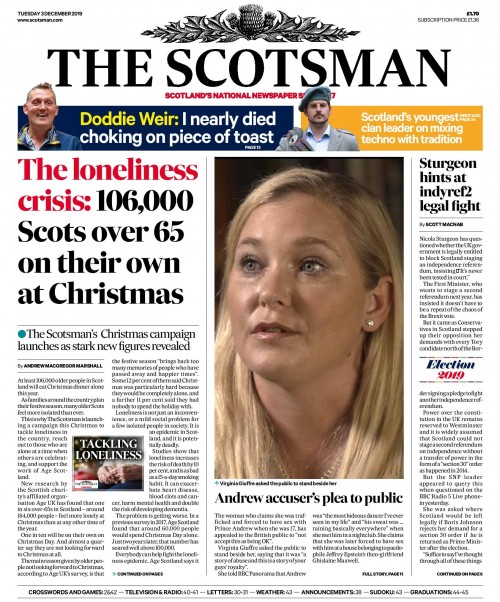 A leader comment accompanying the campaign’s launch reads: “According to new research from Age Scotland, one in six of the older generation – that’s about 184,000 people – say they often feel more lonely at Christmas than at any other time of year. Nearly 110,000 will eat Christmas dinner alone.

“This is the society we have created and we are the only people who can do something about it. And yet, overshadowed by issues like Brexit, independence, the NHS, schools and a whole raft of other pressing matters, it is too often overlooked in our public discourse.

“For all these reasons, the Scotsman is today launching a campaign in an attempt to raise the profile of loneliness – in support of Age Scotland and Age UK’s ‘No One Should Have No One’ campaign – and to give a voice to the voiceless.

“If we think about it, we can all probably do a bit more. We can extend the hand of friendship to relatives and others who we know are lonely. Sometimes it can be difficult or a bit awkward at first, but such feelings will usually dissipate over time. It is not naive to say that the vast majority of people are friendly, decent and kind.

“Modern living has physically stretched the bonds of family as people have moved hundreds of miles away to find better jobs and this has left many elderly people on their own as family and friends of their own generation have died.

“But it cannot be beyond our wit to find ways of bringing people together if they are feeling isolated and alone. We must do better and not just for the sake of public health but public happiness too.”