The family of a First World War soldier have been reunited with a medal found at the bottom of a river with help from a regional daily.

The Yorkshire and the Humber police dive team were conducting a fingertip search of the river when they found the medal in October, and Star reporter Sam Cooper picked up a subsequent appeal regarding the find on Twitter.

Lance Corporal Smith, from Sheffield, served as part of the 6th Battalion York and Lancaster Regiment in WWI, and was just 23-years-old when he died in Turkey in 1915. 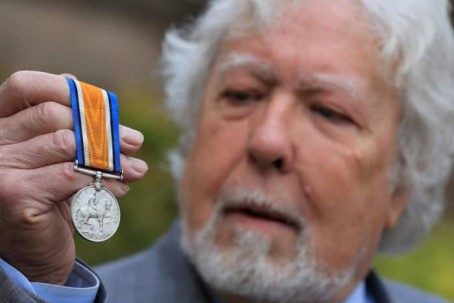 His 77-year-old great nephew Julian Cliff, pictured, was tracked down living on the Wirral peninsula as a result of the appeal and more than 20 of Lance Corporal Smith’s family, including some still living in the Sheffield area, met at Clifton Park Museum, in Rotherham, last month for a ceremony to mark his service.

The medal will now be part of the museum’s York & Lancaster Regimental collection.

Of his part in the reunion, Sam told HTFP: “The story started with a tweet from the marine unit that they had found the medal while searching in the river.

“We followed it up with a call to the divers, who said they were desperate to find Stephen’s family and hand it over to them.

“A series of stories followed as more relatives got in touch with info about Stephen’s life and the Marine Unit even had a family tree mapped out in their office.

“Between us we managed to find the relatives and they arranged a handover just before Christmas.”