A regional daily has dedicated its front page to a heroic cat whose actions snared a teenage burglar.

The Lancashire Telegraph revealed how detectives caught cocaine addict Connor Garton after the pet attacked him during a house raid – causing him to leave behind traces of blood at the scene of the crime.

As a result he was able to obtain a picture of the animal, called Toothless, providing a splash with the headline ‘Claw & Order’ for the Blackburn-based daily on Friday as a result. 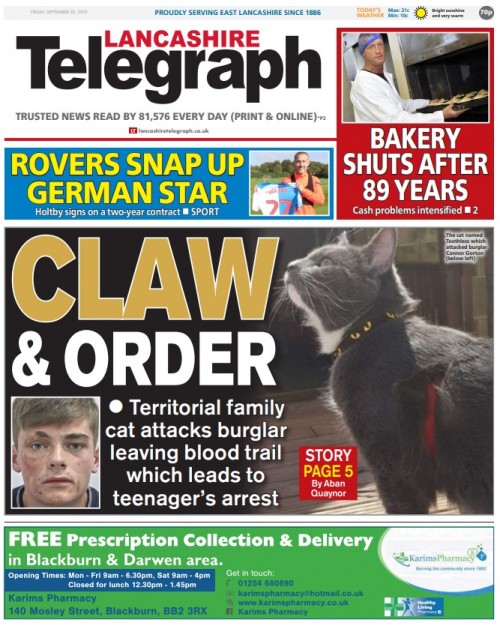 Steve Thompson, Telegraph owner Newsquest’s senior audience and content editor for Lancashire, told HTFP: “Our chief reporter Aban Quaynor, who keeps a keen eye on the courts and has superb contacts, was tipped off about the cat angle and followed the case through from the first hearing.

“It was adjourned at least three times but he stuck with it. We left a note at the victim’s house and also contacted them online.

“She phoned up just as we were leaving the office on Thursday evening keen to praise her hero cat Toothless and also give us the picture.

“Roger Airey, who puts our front pages together most days, set to work on a fresh splash. It was a masterclass in perseverance from everyone involved.”

The court heard that the morning after Gorton had raided the home, in Burnley, with an accomplice, victim Beth Carr had noticed that Toothless was limping and that there was blood on the walls.

When police arrested Gorton they found scratch marks on his face.

Stephen Parker, prosecuting, said: “It was forensic evidence that linked the defendant to the scene in two ways. Both fingerprints from a plug socket and some blood on the wall.

“Ms Carr noticed that morning when she came downstairs that her cat was limping. The cat is called Toothless and she wondered whether the cat might have clawed the burglar. She said it could be quite aggressive with people it didn’t know.”

Gorton, who has seven convictions for 16 offences, pleaded guilty to two burglaries, aggravated vehicle taking, two thefts and driving without a licence and insurance at the hearing.

Isobel Thomas, defending, said: “He had developed a very heavy cocaine habit. It was costing him about £180 per day. His explanation for becoming involved in these offences was in order to obtain goods to fund that habit.”

Sentencing Gorton to 36 months in a young offenders institution, Recorder David Temkin told him: “You are still only 18 and that is a very important factor in this case.”

Gorton was also banned from driving for 30 months.