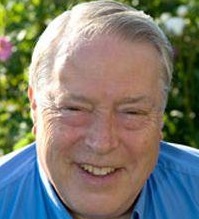 A regional daily editor who went on to launch-edit a new national title has died aged 79.

Tributes have been paid to Brian MacArthur, left, who edited the Plymouth-based Western Morning News from 1984 to 1986

Prior to his spell in charge of the WMN he had served as deputy editor of the Sunday Times, where in 1983 he brokered the serialisation of what later emerged to be elaborate faked diaries of Adolf Hitler.

After leaving the WMN, Brian became founding editor of the now-defunct national daily Today, but rejoined the Sunday Times in 1987 as executive editor and was assistant editor of the Daily Telegraph at the time his career ended in 2010.

Brian’s first job in journalism had been at the Yorkshire Post in 1962, before he moved to London to work on the Daily Mail two years later.

He briefly worked for The Guardian before serving as founding editor of the Times Education Supplement from 1967 to 1976.

Brian then moved to the Evening Standard, serving first as home editor and then deputy editor, before moving to the Sunday Times in 1979.

His friend Dotti Irving told The Bookseller: “Brian was a one-off – a truly talented, shrewd and decisive journalist who never lost his nose for a story, nor his ability to laugh at a good one.”

Brian died on 24 March and is survived by his wife, the writer Maureen Waller, as well as two daughters from his second marriage, Tessa and Georgina.