The Scotsman has parodied a past Daily Mail front page to laud three judges as “Heroes of the People”.

The Edinburgh-based daily splashed this morning on the Court of Session, Scotland’s highest civil court, finding that Prime Minister Boris Johnson’s suspension of the UK parliament is unlawful.

The front page design, pictured below, mimics a 2016 splash by the Mail, which branded three High Court judges “Enemies of the People” after they ruled the government would require parliament’s consent to give notice of Brexit.

In an accompanying editorial, The Scotsman said the three Court of Session judges had stated the “plain truth that parliament was suspended for political reasons.” 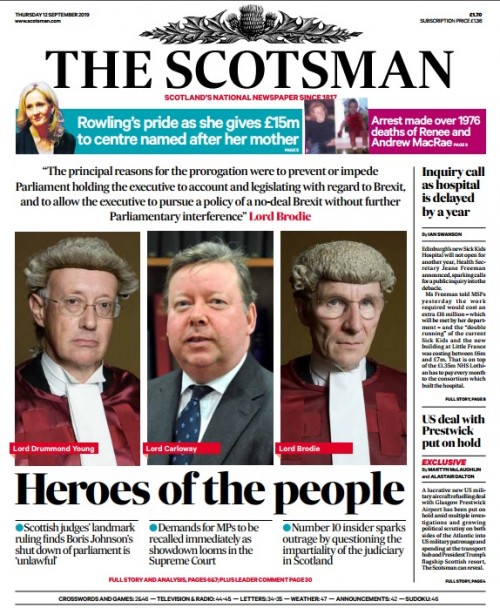 The leader comment added: “The Scotsman has warned the proroguing of parliament is a step towards a dictatorship and urged the government to turn back.

“The reaction to the Scottish judges’ ruling shows Johnson and co are still heading in the wrong direction, still sticking to the bare-faced lie that suspending parliament for five weeks is business as usual and not about being able to force through a no-deal Brexit – against the wishes of parliament and without a mandate from the 2016 referendum.

“In November 2016, after the UK Supreme Court ruled only parliament and not the Prime Minister had the power to begin the formal process of leaving the European Union, the Daily Mail published photographs of the judges with the headline ‘Enemies of the People’, a phrase beloved of dictators like Stalin.

“So the Court of Session judges, Lord Carloway, Lord Brodie and Lord Drummond Young, would have known what to expect from some quarters. It is a brave decision and one that strikes a blow for truth, democracy and the rule of law. And that, in the Scotsman’s view, means they are more than worthy of the title ‘Heroes of the People.'” 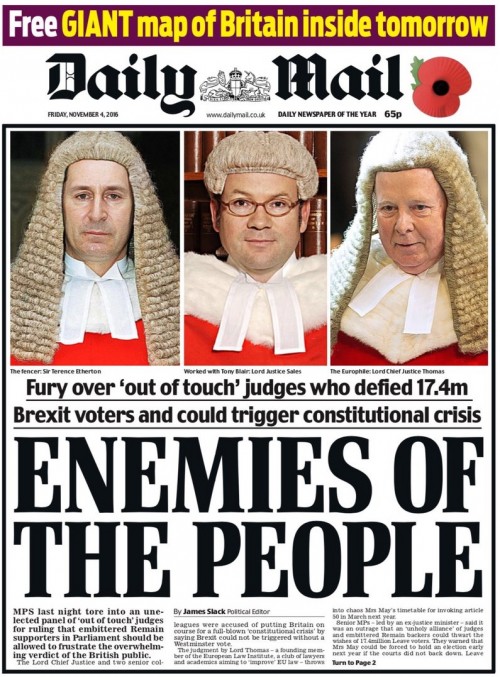