A regional daily columnist delivered his own baby son after his wife went into labour at home.

Steve Canavan, who writes for Blackpool-based daily The Gazette, was faced with taking on the task after wife Liz, a former journalist at the same newspaper, began giving birth in their bedroom during the early hours of last Tuesday morning.

Liz’s waters had broken after going to bed the evening before, but the couple were later sent home after visiting hospital. 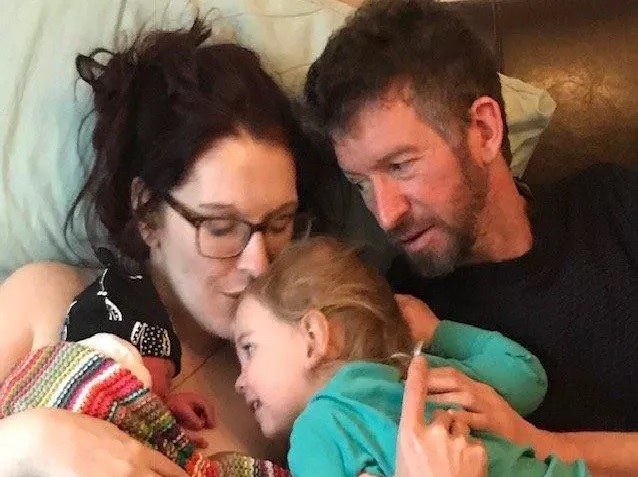 In a column about the experience for the paper, he wrote: “Mrs Canavan was told to lie on the bed. One push later and the head was fully out, at which point I wasn’t sure whether to faint, cry, or to run as far away as possible.

“When our first child had been born, I’d stayed up the head end and not dared looked down below once. Now I had blood and all sort of other suspicious looking gunk on my hands and arms and cradling a small human head.

“This was the scariest part for I noticed the cord was wrapped around the baby’s neck. What’s more the baby was completely lifeless.

“The operator told me to stay calm (calm?!?) and to gently remove the cord. Using a shaky finger I managed, at about the fifth attempt, to loop the cord over his head and untangle it from his neck.

“The baby’s eyes suddenly twitched, and it jerkily moved its head and let out a cry. I don’t think I’ve felt such relief since our plumber told us not to spend £2,000 on a new boiler because the old one was still okay. One more contraction/push and blow me, the whole baby popped out into my hands.

“‘It’s a boy,’ I cried. I knew this not from a physical inspection but because he asked who Man United were playing on Saturday. I had to wipe his body and cover him with blankets to keep him warm and stick my finger into his tiny mouth and make sure it was clear.”

Paramedics and a midwife, who Steve praised as “superb”, arrived soon after to assist the couple and their new son Wilf.

He added: “My son, Wilf Canavan, weighed in at 7lb and will forever be told his father single-handedly delivered him (though Mrs Canavan played a small part too).

“The upside of having a home birth is we saved £2.50 on parking at the hospital. The downside is that we had to bin – because of all the blood – six towels, two sets of bedsheets, one duvet cover and a mattress protector, and spend £110 on replacements from Dunelm Mill… but rest assured, I’ll be taking that out of Wilf’s pocket money when he’s older.

“I’m now off to have whatever medical procedure is necessary to ensure I never father another child. On a serious note, may I just pay tribute to my wife – who, without so much as a paracetamol, pushed out a baby in incredibly brave and calm fashion.

“She was absolutely marvellous and will forever have my admiration. Though it was, as I will always remind her, me who, technically, delivered the baby.”