A regional daily is aiming to reunite a railwayman with a baby he saved from a burning building 57 years ago.

The Eastern Daily Press is appealing to readers to help find the person who was saved by Alan Baker, who is now 89.

Mr Baker’s heroic feat on 15 March 1962 saw him rescue the baby boy from a burning house in Norwich, with the story making the front page of the then-Eastern Evening News.

Mr Baker never reunited with the baby, who is believed to have recovered in hospital, and eventually the family, reported to be a Mr and Mrs Keith Stracchino, moved away. 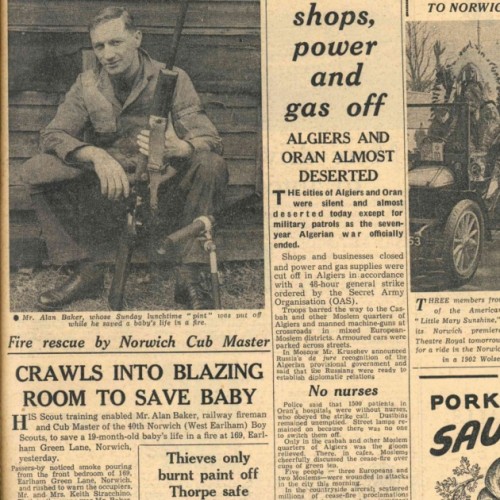 Alan Baker pictured on the front page of the Evening News

Now the EDP has urged readers who may know of the baby’s identity to get in touch.

Mr Baker has written about the incident in a new book he has written called A Life on the Rails.

He told the EDP: “I went walking down the road and saw flames coming out of a bedroom window. “Well I thought to myself thass a rummin’ [that’s very strange]. Then a man run out saying there was a little boy inside. He dragged me into his yard, pushed me upstairs and sent me to rescue the boy.

“I did my collar up as I entered the room and when I walked in I saw it was a great fire and I could hear the baby crying a bit.

“I shouted ‘alright kiddo, I’m coming’ and I crawled on the floor to get to him.”

Reporter Donna-Louise Bishop, who wrote the story, urges readers who might know who the baby was to contact her via email.