A regional daily is bidding to change the law in memory of a woman from its patch murdered by her partner.

The Lancashire Post has launched a campaign aimed at changing Clare’s Law, a scheme which allows people to find out from the police if their partner has a history of violence.

The Post is working on the campaign with the family of Rosie Darbyshire, a mother-of-two from Preston who was murdered by partner Ben Topping just days after she had asked the police for information on him under Clare’s Law.

The Post splashed on the campaign’s launch on Wednesday. 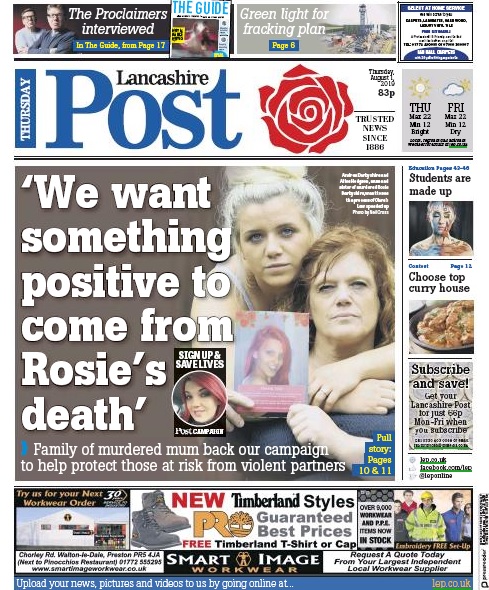 The Preston-based newspaper is petitioning the Home Office, asking for a shorter time frame for results to be disclosed, clarity on what previous offences or charges would result in an immediate disclosure of information, a call back within 48 hours of an application being made and greater awareness of the scheme and how to apply.

Editor Gillian Parkinson told HTFP: “Most of us knew about Clare’s Law, but I don’t think any of us realised the implications of having to wait for such vital information until the investigation into the death of Rosie Darbyshire.

“Preston mum-of-two Rosie was murdered 11 days after asking for information about the man who killed her. At the moment, the police have up to 35 days to disclose the information, so she was never made aware of his violent past.

“This was mentioned in court and from there our reporter Catherine Musgrove worked with Rosie’s family and Michael Brown, the father of Clare Wood, who pushed for Clare’s Law to be introduced after she was murdered by an ex-boyfriend, to ask for amendments to the law.

“We think this is a hugely important national campaign and would like to ask our colleagues across the media to spread the word and sign the petition.”