Student shortlisted for football journalist of the year prize

A student journalist who had yet to graduate from her course has made the shortlist for Football Journalist of the Year after doing freelance shifts during last summer’s World Cup.

After being encouraged to work freelance during her university studies, Molly spent last summer working on the World Cup for the Independent.

She now writes regularly for The Times and the BBC Sport website and will be covering the Women’s World Cup in France later this year. 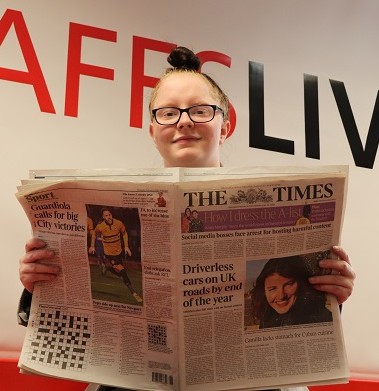 Said Molly, pictured: “I am absolutely overwhelmed to be shortlisted for such a prestigious award, alongside many of the sports journalists that I continue to learn from and admire.

“The Times have supported me, and believed in me to put me forward for the award, which was an honour in itself, and I could not have built the close relationship I have with them without the help of Staffordshire University, particularly Mitch Pryce and Ian Whittell and the depth of contacts they have from years of experience in the industry.

“It can be hard to juggle working as a freelancer in such a pressured, and high-paced field, but the lecturers at Staffs have gone out of their way to ensure I can commit time to my uni work as well as my career and maybe even have a bit of free time too!”

Molly’s course leader Mitch Pryce added: “It’s an astonishing achievement for Molly to be recognised at this level. The SJA also have a Young Sports Journalist of the Year category but Molly has leapfrogged a level into the main award. She’s competing against the likes of Henry Winter and Jonathan Liew – genuine heavyweight professional journalists. ”

Meanwhile the current Regional Journalist of the Year is set to defend his crown at this year’s Sports Journalism Awards.

Chris Wathan has again been nominated for the 2018 title after taking the 2017 crown on the same day he began a new job with BBC Wales.

He previously spent 10 years with Media Wales – which runs titles including the South Wales Echo, Wales Online and the Western Mail.

Chris is joined on the 2018 shortlist by Danny Hall, of Sheffield daily The Star, the London Evening Standard’s James Olley, Jon Colman, of the Carlisle News & Star and Cumberland News, Neil Allen, of Portsmouth daily The News and the Yorkshire Evening Post’s Phil Hay.

The winners will be announced at a gala occasion on Monday 25 February at the Westminster Bridge Park Plaza, in London.

The full shortlist can be seen here.