A cowboy builder has been jailed after two sister dailies’ stories about the fraudster were used as evidence against him.

John Miller was sentenced to four years in prison after being found guilty of fraudulent trading and money laundering at Norwich Crown Court.

Trading standards officers had warned him after a complaint in 2016, but it was only when the article was published in both newspapers that seven more victims came forward – enabling the authority to form a criminal case against the 46-year-old. 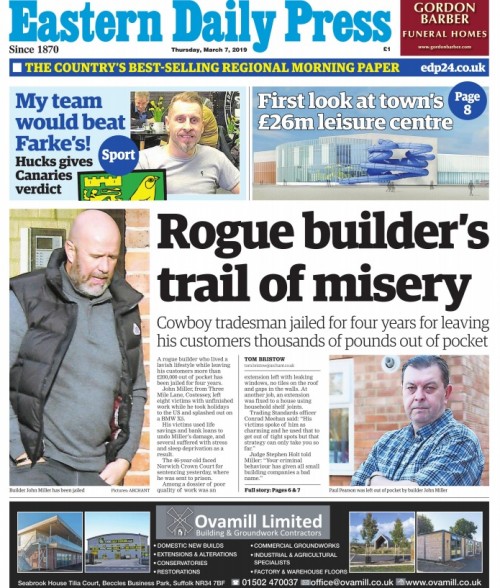 How the EDP covered Miller’s sentencing

Speaking after Miller’s sentencing last week, Conrad Meehan from Norfolk County Council’s trading standards told the EDP: “There was a big flurry of complaints which came on the back of the article and other complainants came to us after that.”

The court heard Miller, from Costessey, near Norwich, took £220,000 from eight customers for extensions which he never completed.

Alison Lambert, prosecuting, said his victims used their life savings, took out bank loans and spent £122,000 to undo Miller’s damage and finish jobs, with some suffering from sleep deprivation and severe stress.

Mark Tomassi, defending Miller, said: “He became blind to what he was doing having got himself in deep water.”

But he described the father-of-three as a “caring” and “decent man”. 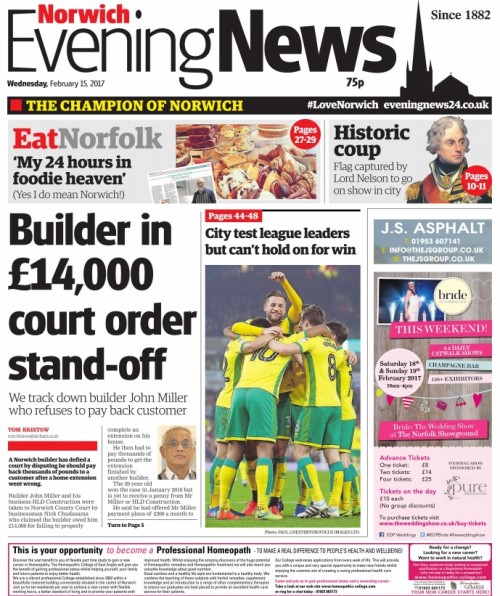 How the Evening News initially covered complaints against Miller

Passing sentence on Wednesday, Judge Stephen Holt told Miller: “You were extremely good at giving excuse after excuse. Your criminal behaviour has given all small building companies a bad name.

“You were prepared to carry on works which were inadequate and would have been a danger, in particular of a roof collapse.

He added: “You have shown no genuine remorse. You blame others but… you alone are the dishonest one. This case has demonstrated the pain and suffering your criminal behaviour has brought to your victims and their families.”

Tom Bristow, investigations editor for EDP and NEN owner Archant, told HTFP: “It’s great to see the impact this article had on the criminal investigation. Unknown to us when the article was published; there were many victims of Miller out there who until that point has been reluctant to come forward. With their testimonies and thanks to the hard work of trading standards Miller finally got what he deserved.”