Court chiefs have met have met with representatives from the regional press to discuss how they can better help journalists covering hearings.

Representatives from the Bristol Post, Gloucestershire Live and Somerset Live spoke with HM Courts and Tribunals Service personnel at the first in a series of roundtable meetings which will take place across England and Wales.

The event, held in Bristol, was jointly chaired by HMCTS CEO Susan Acland-Hood and Ian Murray, executive director of the Society of Editors.

It comes following the launch of national HMCTS media working group last year, which is designed to help promote media access to courts and has already produced draft new guidance for HMCTS staff on dealing with the media. 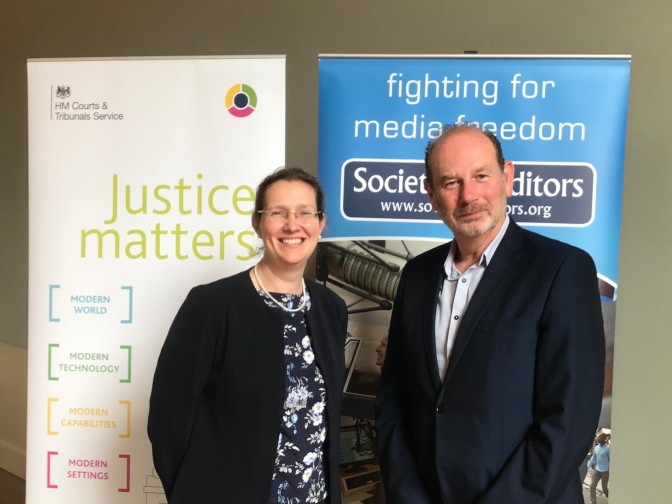 Susan Acland-Hood and Ian Murray at the event

Said Ian: “This was the first of a number of regional events and proved to be very productive and positive.

“The importance of open justice cannot be overstated particularly in these times of a fragmenting media landscape.”

Representatives from the Press Association and Heart Radio also attended the meeting.

Ms Acland-Hood said: “Open justice is a fundamental part of our legal system and media reporting of court proceedings remains the primary means by which the wider public has access to the vital work of our courts and tribunals.

“We are delighted to be working with the Society to understand how we can improve the way we work with the regional media as part of our wider effort to build and maintain public confidence in the justice system.”