A council has performed a U-turn on plans to scrap cautionary gritting on hundreds of miles of roads after pressure from three sister weeklies.

The Northampton Chronicle & Echo, Northants Telegraph and Daventry Express had called on Northamptonshire County Council to reconsider it policy after a number of reported accidents over the past few weeks on ungritted roads.

The papers urged the council to “think again” in front page pleas two weeks ago, prompting its Conservative leader Cllr Matt Golby to announce last Tuesday that the idea had been scrapped.

The news was celebrated in an opinion piece run in last week’s Telegraph. 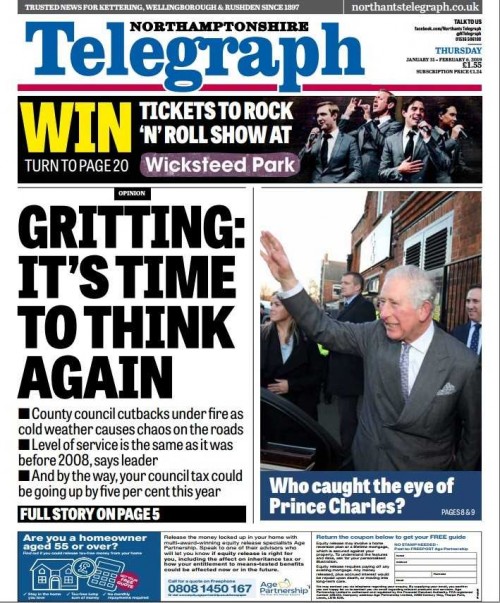 It states: “Never underestimate the power of the press. Just seven days ago this newspaper, together with our sister titles in Northampton, Daventry and the south of the county, called upon Northamptonshire County Council to rethink its policy of cutting the number of roads from its priority gritting routes.

“And on Tuesday morning council leader Matt Golby confirmed he had done just that, and pledged to restore the gritting programme to last year’s levels. While he admitted our collective campaign had made a difference, we can’t and won’t claim all the credit.

“Some of the county’s district and borough councils have stepped in to help with the extra cost, and we’re not pretending for a minute that this policy would have been overturned had it not been for their financial intervention.

“But the fact is that your local newspaper remains an effective way of holding those in power to account and, as this case proves, changes can be brought about by working together.”