A mural of a drunk dragon painted in memory of a former journalist could be scrubbed off after the artwork prompted a number of complaints.

The family of Tom Davies, who worked for the Western Mail and died three years ago, put up the mural on the side of their pub in Bicknacre, Essex, in tribute to his Welsh roots and love of real ale.

The pub, previously known as the Brewers Arms, is undergoing renovations before reopening under the Drunken Dragon name.

But Chelmsford City Council has ordered Tom’s son David and grandson Ben to remove the mural after it received a number of formal complaints from neighbours. 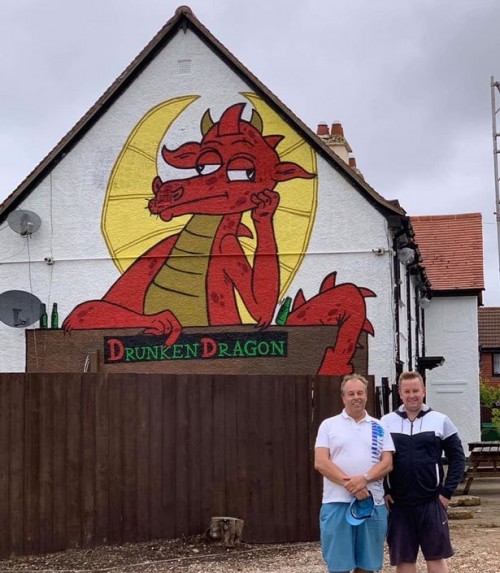 David Davies, left, and son Ben with the mural

The Davies family are in the process of appealing the decision.

Ben, 26, told Essex Live: “We are looking to appeal it, we don’t want to make enemies of the council. We are still waiting to hear back from the council but we have come to the realisation that it might have to be taken down.

“I would be upset if they don’t accept our appeal and we have to take it down, because it means a lot to us. We would have to just put our original ‘Drunken Dragon’ sign in its place instead, it just wouldn’t be the same.”

Tom, who was an “ardent proud Welshman who loved rugby and real ale”, served in the Royal Air Force in the Second World War before joining the Cardiff-based Mail.

In later life he lived in Essex, where his family are now based.

Ben said: “Roughly eight years ago I was in a bad stage in my life, I was mixing in with the wrong crowd end eventually paid the price for those mistakes. But my grandad pulled me up from that.”

He added: “The theme and the artwork is a memorial to celebrate my grandad’s life and what a role model he was to me. “He loved a drink and was proud to be Welsh – that’s the reasoning for the ‘Drunken Dragon.'”

A spokesperson for the council said: “The council have received a large number of complaints from local people regarding the ‘drunken dragon’ mural in Bicknacre.

“Under the Town & Country Planning Act it is considered an advertisement and in response to these complaints, our officers have written to the pub owners to ask them to remove it.”