The world’s biggest rock band has revealed the track listing for its new album in a classified advert in a regional daily.

Coldplay are due to release their eighth studio album Everyday Life on 22 November.

Now they have revealed the tracklist for the double album in a classified advert in the North Wales Daily Post – generating a world exclusive for the Llandudno-based title.

The band has strong links to North Wales, with guitarist Jonny Buckland having grown up in Pantymwyn, near Mold. 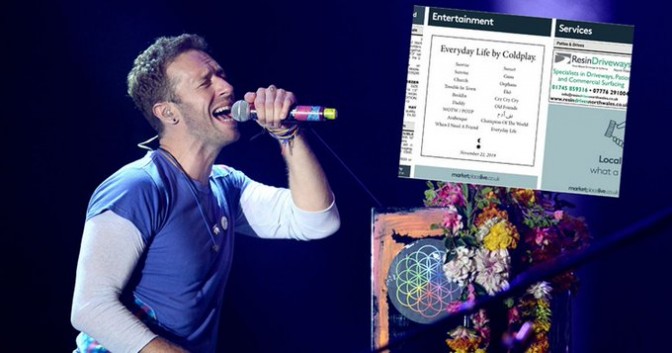 The advert, which revealed that the two sides of the album will be respectively titled Sunrise and Sunset, appeared on page 31 of yesterday’s paper alongside ads for fridge freezers, resin driveways and bales of hay.

It is the latest in a series of hints dropped by the band about the forthcoming album which will be their first since Head Full of Dreams in 2015.

A letter from the band shared with fans on social media last week revealed that they had been “working on a thing called Everyday Life”.

It added: “In the classifieds you might write ‘double album for sale, one very careful owner’.

The advert lists 18 tracks including one whose title is not written in the Latin alphabet.