A cobbler who collects a regional daily’s bills every day is marking a football club’s FA Cup heroics by selling the sheets for charity.

Newport County AFC are set to take on current English champions Manchester City tomorrow (16) in the fifth round of the FA Cup, having already humliliated 2016 champions Leicester City in a previous round.

Now Kelvin Reddicliffe, who has collected South Wales Argus bills highlighting County’s victories over Leicester and Middlesbrough, is aiming to raise cash for Newport-based St David’s Hospice Care by framing and selling them.

Cobbler and avid collector Mr Reddicliffe, 63, generates thousands of pounds for the charity each year through his various sales of collectables and has featured in the Argus on numerous occasions due to his various charitable efforts. 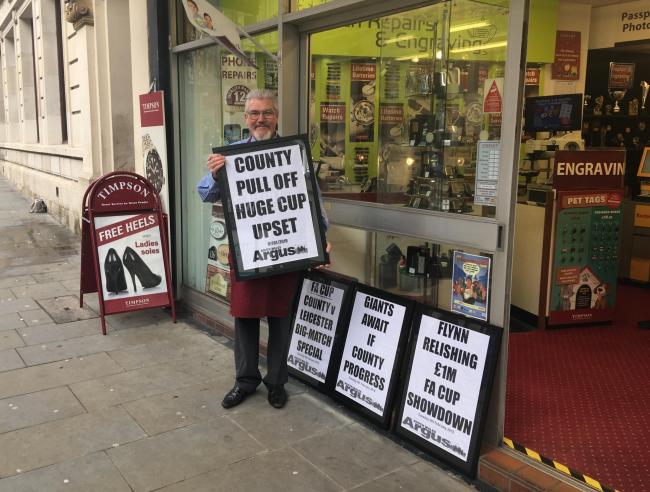 He told the newspaper: “I pick up the bills at the end of the day from the display outside my local newsagent. It’s costing me a small fortune in buying scratch cards as I feel that I have to buy a couple whenever I pop in and ask to have the bills.

“The shop keeper is happy to let me have the bills as they’re no use to him. I get each of the used bills framed. I am selling each for £100.

“They’ll make a unique piece for the collector of things related to Newport County’s unique heroics in the 2019 FA Cup leading up the crunch match against Premiership champions Manchester City on Saturday.”

Kris Broome, of St David’s Hospice Care, said: “We never cease to be amazed at the ingenuity and creativity Kelvin employs in his various fund-raising endeavours for our charity.

“We are ever so grateful to all that he does and the money he raises for St David’s Hospice Care.”