A city news website has urged readers to take selfie photos with teddy bears to raise awareness of its relaunched foodbank campaign.

HTFP reported in December how Birmingham Live had collected more than 220 tonnes of food to help its patch’s poor over Christmas thanks to its ‘BrumFeeds’ campaign.

The campaign has now been relaunched for 2019, and Birmingham Live gave out 270 teddy bears to highlight the numbers of children using food banks in the city every week.

The cuddly toys, pictured, were handed out at Birmingham New Street station on the condition that recipients posted a social media selfie with their bear to highlight the campaign. 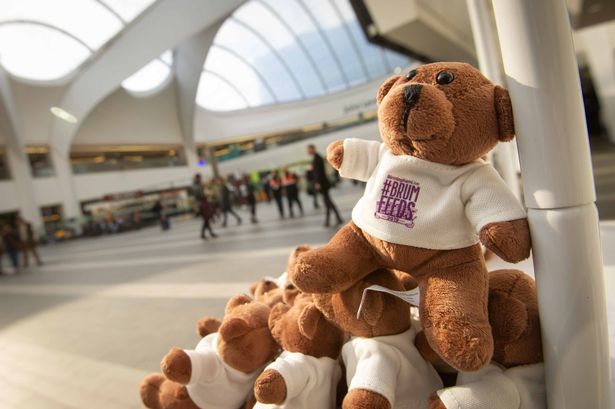 Birmingham Live editor Anna Jeys said: “Our aim is to reach as many Brummies as possible through social media and making them aware of these shocking figures.

“Sharing teddy bear selfies with the #BrumFeeds hashtag, there is potential to reach new people who wouldn’t otherwise hear about the issue or learn how to help.

“The average person has 338 Facebook friends, and 208 followers on Twitter – that means the 270 people sharing our message could reach tens of thousands of people.

“If even a fraction of those people donate to their local food bank it will do far more good than any single donation from us.”

Birmingham Live brand manager Dan Campbell, who helped coordinate the campaign, added: “Social media is the biggest platform we have, and it’s available to everyone.

“People who see these posts make a donation to their local foodbank it will make a far bigger difference for Brummies in need than we could ever achieve by ourselves.”