A city daily ran a second special edition this morning after exclusively revealing a top football manager on its patch has quit his job.

The Glasgow Evening Times landed the exclusive that Brendan Rodgers is leaving Scottish champions Celtic to take charge of Leicester City, tweeting a link to the story at 8.23am this morning.

Mr Rodgers has won seven trophies during his time with Celtic, who he joined in 2016 – the same year in which Leicester were unexpectedly crowned champions of England.

The Evening Times has also exclusively revealed former Celtic boss Neil Lennon, who also previously played for Leicester, will take charge in Glasgow as a result of the departure. 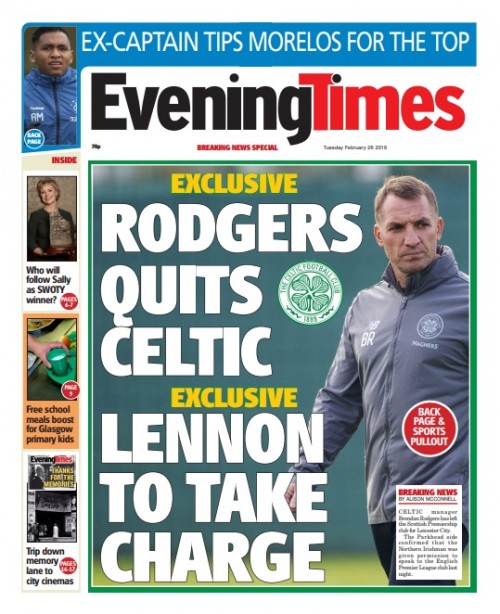 Evening Times news editor Deborah Anderson told HTFP: “Our sports reporter Alison McConnell broke the story for online and we are the first paper to break the story in print.

“Today we show once again we are first for breaking news on Celtic and Rangers and ensuring our loyal readers get the first class service they deserve.”

Leicester’s poaching of Mr Rodgers has led supporters to recall the summer of 2000, when then-City boss Martin O’Neill went the opposite way to take up the equivalent post at Celtic.