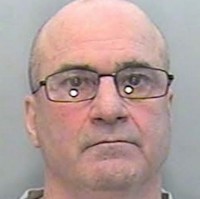 A child sex assault victim has thanked a regional news website for its part in bringing her attacker to justice.

William Pope, left, has been sentenced to six-and-a-half years in prison for a historic sexual assault after being spotted by his victim in a Cornwall Live article.

The 2017 article listed 67 ‘prolific sex offenders’ in Cornwall, prompting his victim to contact the police after identifying him as her assailant in the attack, which took place in 2003 when she was just 13.

Following an extensive police investigation and press appeals, the case was originally filed as undetected, but was reopened after the piece’s publication two years ago.

Pope, 53, is currently residing in HMP Channings Wood, in Devon, after being previously jailed in 2017 for a string of indecent and sexual assaults on girls.

He was sentenced for the offence at Truro Crown Court yesterday after pleading guilty.

He said: “William Pope is one of Cornwall’s most prolific sex offenders and his name alone sends a shiver down the spine of many people living in the Penzance area. When I saw him sentenced in court on the last occasion in 2017 I presumed that would be the last I’d see of him.

“However, it is a result of the enormous strength of the victim that she saw the article published the last time Pope was sent to prison and had the courage to report to the police what Pope did to her many years ago.

“He has now pleaded guilty to a further offence and will remain where he belongs – in prison. If it wasn’t for this remarkably strong victim coming forward Pope would have by now been released back into the community. That is a scary thought.”

In a statement, Pope’s victim said: “I feel relieved that finally he will pay for his crime and that he can’t hurt anyone else and will remain behind bars.

“As for the press, I want to say thank you because without that article he would be walking free right now, my attacker wouldn’t have a name. To be able to say to myself ‘this happened to me and this person did it and he’s been convicted’ is something I never thought I would be able to say.”

Philippa Jenkins, editor of Cornwall Live, told HTFP: “The successful conviction of William Pope highlights the importance of local and regional media’s court reporting. If Cornwall Live had not been covering the case already and been able to publish Pope’s picture the brave victim, in this instance, might have never come forward.

“Not only does court reporting record where justice is being delivered across the country but it also leads to the media, the courts and police forces being able to work together from the point of the incident, through the investigation and then on into any eventual court cases.

“The result of this can range from the media helping to increase crime awareness, but further than that press’ crime and court reports can prevent further offending and, in some of the best examples, like this one, be fundamental in successful prosecution of criminals. Long may it continue.”