Reporter who snared ‘danger’ driver hits out after sentence reduced

A journalist who snared a driver using his phone while driving with no hands down a motorway says she is “appalled” after the offender received a reduced fine after entering a late guilty plea.

Former Basingstoke Gazette chief reporter Emily Roberts, who now works as a freelance, says her experience of seeing Joe Christopher Bray receive a lesser punishment after helping bring him to justice may put her off reporting a crime again.

Emily was a passenger in her father’s car in January when she captured footage of Bray driving in the fast lane on the M3 while on his phone – but subsequent attempts to send the footage to the police failed and she was only able to provide them with a screenshot of the offence taking place.

Now she says she has been left “frustrated and disappointed” by the criminal justice system over the way the case was handled. 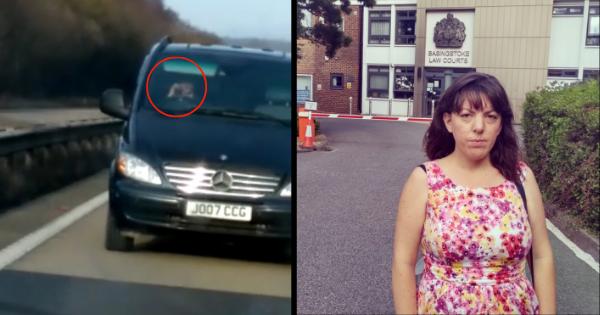 Emily Roberts, right, and a screenshot of the footage she captured

In a piece for the Gazette, Emily explained how she had initially obtained the evidence.

She said: “Hoping to shock him into ending his call, I filmed him from the back window using my mobile phone. However, he was so distracted, he failed to notice, and at one point I saw him with no hands on the steering wheel.

“The casualness with which he was using his phone, and his apparent relaxed conversation, suggested he wasn’t deterred by the law, or the danger he presented to himself and other road users.

“I felt a sense of responsibility to stop him doing this again, and so immediately contacted the police informing them I had video footage. Naively, I assumed the matter would be dealt with easily and promptly, given my evidence was irrefutable.

“However, attempts to send my video to the police failed, with them unable to receive it via Facebook messenger and it being too large to email. We compromised with a screen shot, which led to Bray being fined £200 and given six points on his licence.”

Emily was then informed in June that Bray was contesting the fine and was asked to give a statement in court after he requested for the case to be heard there, with her full video footage finally being sent to police via an officer’s private WhatsApp account.

But she was also “appalled” to learn that as a result of the decision to contest the Crown Prosecution Service may opt to reduce the fine to ave the costs of taking it to court.

The case was heard before magistrates in Southampton last month, where Bray pleaded guilty after seeing the footage before his hearing.

Emily added: “I assumed his fine would increase as a result of his late guilty plea. Instead, having wasted mine and the court’s time, his fine was reduced to £100. The six points remained, and he was ordered to pay £85 costs and £30 court costs, but the actual fine was cut by 50 per cent. I can’t blame him for this. Had Bray been presented with all the evidence from the outset, he almost certainly would have realised he had no grounds for a not-guilty plea.

“The most frustrating part is that the police made it clear that costs often dictate decision making. The CPS might have considered reducing the fine to save money. Yet they could have saved these costs, and my time, simply by presenting Bray with the video evidence beforehand.

“This is a case whereby I’m not really a victim. I didn’t suffer as a result of Bray’s actions. That’s not to say my own actions didn’t weigh heavily on my mind, questioning whether I was about to ruin Bray’s life if the points on his licence meant he would lose it, or employment. However, his brazenness to fight it, reassured me that this was a man who didn’t care, so neither should I.

“It was a frustrating and disappointing experience, and one which might put me off reporting a crime again. I have a new empathy for victims of serious crime who must feel this to a far greater degree, particularly if justice is not served at the end of the ordeal, or if late guilty pleas are rewarded with a reduced punishment.”