Dame Frances, the author of a wide-ranging review into the future of news published earlier this year, was discussing the importance of public interest journalism at the NCTJ’s equality, diversity and inclusion conference last week.

Her review called for the establishment of a publicly funded Institute for Public Interest News, and she also backed the expansion of the local democracy reporting scheme between the BBC and regional press.

She spoke with NCTJ chairman Kim Fletcher in the keynote session at the conference, which was held at Reuters, in London. 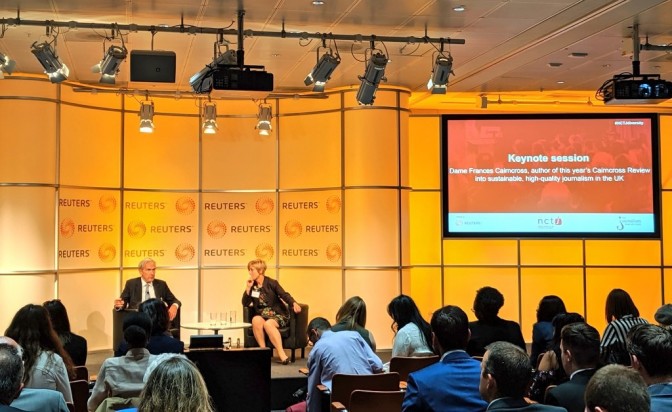 Dame Frances, right, with Kim Fletcher at the conference

According to a report by the NCTJ, Dame Frances told the conference: “There are aspects of news that really are in the public interest and make democracy work, such as reporting on high court, magistrates court, school boards and hospital boards.

“These bodies are part of the fabric of democracy and we need trained reporters to write about this essential area.”

The conference also hosted a session on balance and fairness in reporting, particularly regarding ethnic minority voices and cultures.

John Price, senior lecturer in journalism at the University of Sunderland, told delegates: “It’s not enough to improve the diversity in newsrooms, it’s about changing the culture in newsrooms.

“We need to change the unconscious bias and the language we use, and not just at reporter level, but right the way through the organisation.”

Another session saw Alison Gow, editor-in-chief (digital) at Reach plc, speak about the opportunities diversity and change creates for journalism, and the culture of newsrooms.

Attendees also heard from former apprentice Dan Wright, who has risen through the ranks at KM Group and is now news editor at the Kentish Express.

More than 100 journalists, editors, educators and students attended the event on Thursday.