A 26-strong shortlist has been unveiled ahead of a public vote to choose the best regional press campaign of the past year.

The annual contest is run as part the News Media Association’s Journalism Matters campaign, formerly known as Local Newspaper Week, with the winner receive the Making a Difference prize at next month’s Society of Editors Regional Press Awards.

There are two nominations each for the Bristol Post and Eastern Daily Press, with the Post’s Year of Change campaign, which called on its patch to face up to and resolve its deep-seated racial divisions and inequalities, making the shortlist.

As part of the campaign, the newspaper ran a front page apology for a 1996 splash it had run which featured headshots of black men looking like “slaves in cages”. 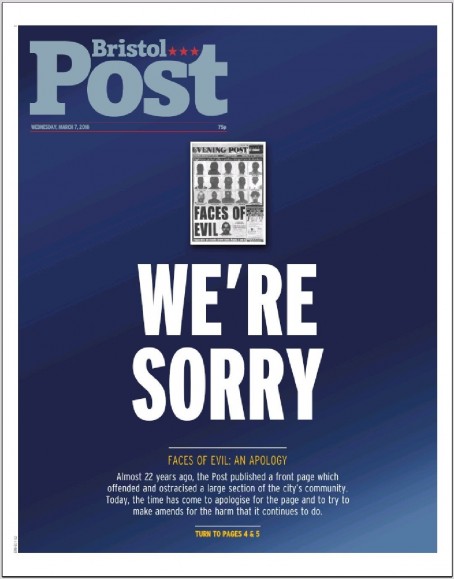 The Yellow Advertiser’s investigation into a paedophile ring and The Sunday Post’s campaign against surgical mesh, the Chorley Guardian’s drive to raise funds for a new food bank are also on the shortlist.

The campaigns will be open to a public vote kicking off on 13 May, with the winner being announced by NMA vice chairman Henry Faure Walker at the Regional Press Awards on 17 May.

Said Henry: “Campaigning is one of the unique strengths of the news media industry. Each year, our sector runs hundreds of campaigns which shine a spotlight on important local and national issues and change people’s lives for the better.

“Journalism Matters is designed to celebrate our unique role and bring the industry together to shout unashamedly about the benefits we create for society.”

The full shortlist is as follows, and more details of each entry can be found on the Journalism Matters website.