BBC criticised over failure to include regional titles in press review

The BBC has been criticised for failing to regularly include regional newspapers in its morning press review.

Former journalist and SNP House of Commons leader Angus Robertson has hit out at BBC Radio 4 for not including non-London newspapers on a regular basis in the Today programme’s press review, claiming it is “unrepresentative of media plurality across the nations and regions of the UK”.

Before moving into politics, Angus worked as a journalist on Austrian public radio, where preparing and presenting its press review was among his duties.

In his regular column for pro-Scottish independence daily The National, pictured, on Saturday, he noted how his review had included news sources from across Europe, adding that Deutschlandfunk, Germany’s BBC equivalent, featured regional titles from across the country when he used to listen to its daily review. 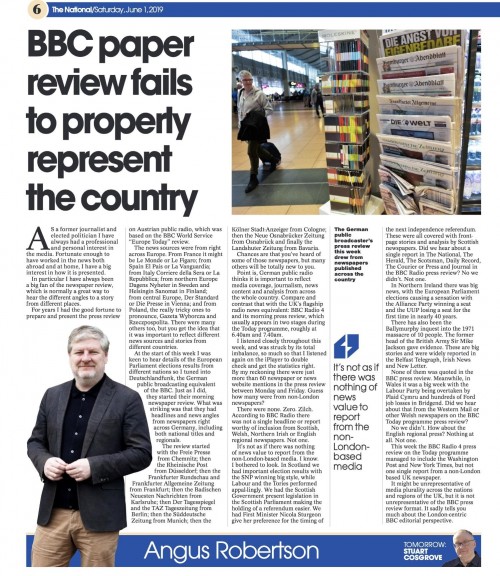 Wrote Angus: “Compare and contrast that with the UK’s flagship radio news equivalent: BBC Radio 4 and its morning press review, which usually appears in two stages during the Today programme, roughly at 6.40am and 7.40am.

“I listened closely throughout this week and was struck by the total imbalance, so much so that I listened again on the iPlayer to double check and get the statistics right.

“By my reckoning there were just more than 60 newspapers or news website mentions in the press review between Monday and Friday. Guess how many were from non-London newspapers? There were none. Zero. Zilch.”

Added Angus: “How about [mentions of] the English regional press? Nothing at all. Not one.

Angus went on to discuss what he considered the big non-London stories of the week, including the Scottish Parliament passing legislation to make a new independence referendum easier, Northern Ireland’s European election results and an announcement that hundreds of jobs set to be lost at Ford’s plant in Bridgend.

He mentioned The National, The Herald, The Scotsman, Dundee Courier, Aberdeen’s Press & Journal, the Belfast Telegraph, Belfast News Letter, Irish News and Western Mail as titles which had not been mentioned in the press review.

“This week the BBC Radio 4 press review on the Today programme managed to include the Washington Post and New York Times, but not one single report from a non-London based UK newspaper,” he wrote.

In response, a BBC spokesman told HTFP: “The news reviews focus on the biggest news stories of the day and feature newspapers with UK wide circulation and increasingly the websites which are most read by people across the UK too.

“When judged on a longer period than a week it’s clear the reviews include different papers and outlets, such as when there are major news stories and events in different parts of the UK, as an example.”