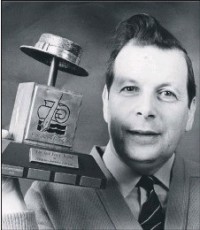 An award-winning journalist who spent 23 years with a regional daily has died aged 88.

Tributes have been paid to Alan Montogomery, pictured, who worked at Portsmouth daily The News in roles including property correspondent and features writer between 1969 and 1992.

Alan was the first journalist in the UK to win the Royal Institution of Chartered Surveyors Property Writing Award three consecutive years and was also named Hampshire Journalist of the Year for a series of feature articles on the New Forest,

He was also given had the honour of naming two new property developments in Hampshire – Maple Down, in Petersfield, and Anchorage Court, at Lee-on-the-Solent.

Hove-born Alan began his career on the Brighton Evening Argus and went on to work for the London Evening Standard, Manchester Evening Chronicle and Bournemouth Echo.

After working for the BBC in both radio and television, Alan returned to worked in the printed press with The News in 1969.

After retiring, Alan devoted his time to reading, the theatre and dog walking near his home in Portchester, Hampshire.

He died with his wife Rose and two children by his side.

His family added: “He has finally laid down his pen and closed his mind of endless curiosity.”