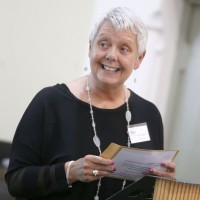 An award-winning  weekly editor is stepping down after 21 years in the role and four decades in the industry.

Bev Thomas, pictured, has announced she will be leaving the Tindle Newspapers-owned Cambrian News to spend more time with her family.

Bev will be replaced by Natalie Lawson, who is currently assistant editor at the News.

In other changes, Dylan Davies has been promoted to news editor and Julie McNicholls Vale to deputy news editor.

Under Bev’s editorship, the Aberystwyth-based News was this year named Welsh Weekly Newspaper of the Year and is the biggest-selling weekly newspaper in Wales.

The paper has also been named Welsh Weekly Newspaper of the Year twice before under her leadership and several members of the editorial team have won a string of journalism awards.

Said Bev: “This has been a tough decision. Journalism has been my life and passion for 38 years, from my beginnings as a reporter, through roles as news editor, editor and then in the last 10 years as managing editor.

“I have made so many friends across all walks of life and have had the honour or working with such talented people. What wonderful memories I will take away with me.

“What has given me greatest satisfaction is our success in fighting the corner for our readers, in holding politicians to account and in helping people to publicise their happy occasions and good works.

“I have represented the Cambrian News at hundreds of events and occasions over the years, including celebration dinners, sports events and business functions. The Cambrian News is rooted in its local communities and this gives me great pride.”

“From the days of hot metal and punching out the stories on typewriters, to the fast-changing digital age, journalism has evolved so much. I feel lucky to have been given the opportunity of a fantastic career, and for that I am grateful to Tindle Newspapers, and to the Read family before that.

“My job was made so much easier because of the wonderful, professional, loyal, dedicated and hard-working staff that we are lucky enough to have here at the newspaper, and have had here in the past. I will miss working with them so much.

“But it is time for new blood at the helm and I am confident that Natalie and the editorial team will take the Cambrian News forward in the years to come and maintain its position as the best weekly newspaper in Wales.

“I am looking forward to spending more time with my family, who have patiently and lovingly been the wind beneath my wings for so many years.”

Natalie paid tribute to her predecessor in a piece published on the letters page of the News last week.

She wrote: “I thank Bev personally for her support and mentorship since I started work at the Cambrian News 13 years ago as chief sub-editor, then for the last decade as assistant editor.

“Bev’s are very big shoes to fill, but I hope to follow in her footsteps, with the help of our fantastic team, highlighting all your triumphs, holding authority figures to account, fighting against injustices, and covering all the big stories that affect our communities.”