A journalism student helped complete the draw for the third qualifying round of the FA Cup as part of a work experience programme.

Samuel Ogunleye followed in the footsteps of footballing icons such as Pele and Glenn Hoddle when he was selected to draw the balls from the pot following a stint of work experience as a match reporter.

The University of Northampton student is a member of the FA Young Reporter Club who are reporting on matches in the qualifying stages of this year’s FA Cup.

As an added benefit of the scheme, Samuel was entered into an electronic draw to take part in the official FA Cup draw at Wembley and won. 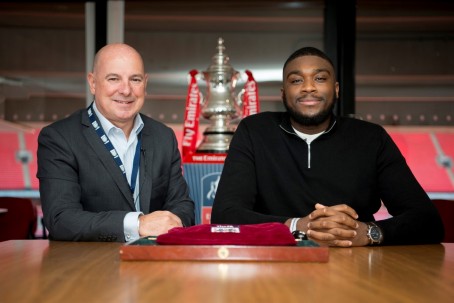 The 22-year-old said: “It was unbelievable. I mean, who gets to say they took part in an FA Cup draw and had that power to determine which teams will play who in whatever part of the country.

“They explained to me that usually one person does the draw or they’ll have an ex footballer come in, so for us to get this chance is unreal.”

The opportunity to report on matches for the FA Cup qualifying rounds arose through Samuel’s lecturer, Marc Webber, who introduced him and a group of fellow students to a scheme giving young people opportunities to write match reports for The FA Cup, FA Youth Cup, Women’s FA Cup and Women’s Super League.

“My lecturers have really helped me in getting work outside of University as they always present opportunities to us, but it’s up to us to apply and take it to the next level. Marc especially has helped a lot and without his sharp eye looking out for opportunities I would not have done a lot of the work I’ve been involved in,” he added.