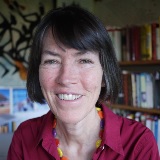 A weekly newspaper’s former women’s editor who went on to a career in academia has died aged 64.

Sally Dugan, left, spent two years in charge of the features page of the Oxford Times, from 1978 to 1980.

Sally had begun her career as a reporter with the Oxford Mail in 1976, taking up the features job with the Times two years later.

She left the job when pregnant with her first child in 1980, but continued to freelance and provide poetry reviews for the paper.

Born Sally Duncan in Hove, Sussex in 1954, she studied English literature at the University of York before enrolling on the post-graduate journalism course at Cardiff University in 1975.

There she met her husband, David Dugan, and the couple were married in Steeple Aston in 1977.

David’s work in television took them and their two young children to Boston, Massachusetts in 1986, but Sally continued to be a regular contributor to The Times and the Radio Times.

Back in Britain, she freelanced for several years before eventually retraining as a teacher at Oxford University and teaching English at Wychwood School from 1993 until 2002.

Sally later lectured in literature at Oxford Brookes, Middlesex and Birkbeck and did a research fellowship at the University of London.

She is survived by her husband David, her children Christopher and Emily, and her sisters, Janet, Mary and Lucy. The Oxford Mail has published a full obituary here.