A weekly newspaper is set to return to the street where it was founded more than 160 years ago when it moves offices.

Iliffe Media has announced that the Grantham Journal will return to Watergate, where it was established in 1854, when staff move into new headquarters there.

The new base was formerly a woman’s outfitters, called Diva, and it is hoped Journal staff will vacate their current St Peter’s Hill home at around Easter.

Local contractors are being used to update the building, including “long-term advertisers and Journal supporters” Avanti Windows and Viking Signs. 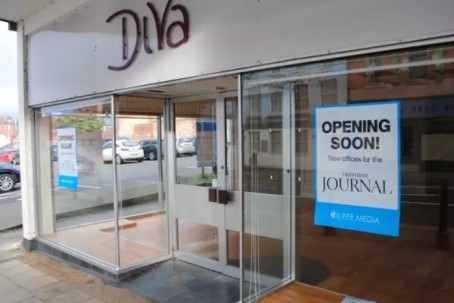 18 Watergate, the future home of the Grantham Journal

Group editor Paul Richardson said: “The editorial and advertising staff are looking forward to moving in by April. It’s great that we have been able to use local contractors to do the work for us, because that is what the Journal is all about… the people in the community it serves.

“This move means we will be able to serve that community even better.”

The Journal was one of 13 Johnston Press titles bought by Iliffe in a £17m deal last year.

Since then, the company has moved a number of papers into new premises, including the Haverhill Echo and Lynn News, as well as reopening previously closed office receptions.

Of the Journal’s move, managing director Richard Parkinson said: “We have been looking for a new base, where we can welcome readers and advertisers to call in, for sometime and now we have it, right in the heart of the town centre and in a location which has links to the founding of the Journal.

“This is a high-profile premises for us, which is just what we were looking for, it suits our needs perfectly. Iliffe Media wants to invest in the Journal, as it is clear local media and Grantham have a great future in store, and this is the first step in that journey.”