A council has removed a monument from its “dangerous” location on a busy roundabout thanks to a weekly newspaper.

The Goole Times splashed two weeks ago on how the installation of a large naval gun monument on a roundabout on Normandy Way had led to critcicism of East Riding of Yorkshire Council.

Two information boards in front of the gun told the story of the Mulberry Harbour, temporary portable harbours that were built to help the Allied invasion of Normandy during the Second World War.

Sections of the harbour were built nearby, giving the road its name. 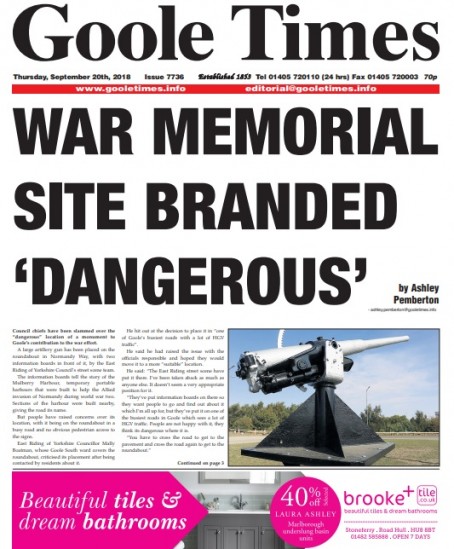 But people raised concerns over the monument’s location on a roundabout in a busy road and no obvious pedestrian access to the signs.

Within 24 hours of the newspaper going on sale, the monument had been moved, with council chiefs citing concerns over safety as the reason.

Ashley Pemberton, the Times reporter who worked on the story, said: “It’s good to see the council listening to concerns we raise in our paper. It shows local papers still have the power to hold those in charge to account and put their decisions under scrutiny.

“The monument was just plonked there with no pomp or ceremony and some people were confused as to what it even was.

“The main concerns people were raising to us were how people were supposed to safely access the memorial.

“Nobody has an issue with the council erecting a memorial to the war effort, but there were genuine concerns about those who wish to pay their respects or learn more about the monument just could not safely get to the location.”

In a statement to the paper, Paul Tripp, head of streetscene services at East Riding of Yorkshire Council said: “In light of recent concerns raised, we have removed the memorial naval gun and information boards from the Normandy Way roundabout.

“We are now looking to install them at a different location to commemorate the centenary of the end of World War One and as a fitting remembrance for the efforts and sacrifices that were made by the people of Goole.”

The decision was hailed as a “victory for common sense” by the ward councillor who represents the area.

East Riding of Yorkshire councillor Mally Boatman, who had raised concerns about the monument in the paper’s initial story, said: “I really did think it was a dangerous position and it’s definitely a victory for common sense, but let’s do the right thing now. If we are going to have it in Goole, I just want it to be in the right place so people can see it and pay their respects in safety.”