A weekly newspaper saluted its “snow heroes” by dedicating its front page to those who had helped others during recent bad weather.

The Fife Free Press splashed with an image of a red rose in the middle of a heart shape cut into the snow in honour of its patch’s unsung heroes.

Fife had been at the centre of a Met Office red alert during the poor weather, and the Free Press ran nine pages of coverage inside.

The edition hit newsstands on Friday after the paper’s reporters had spent the previous week covering the weather online and on social media. 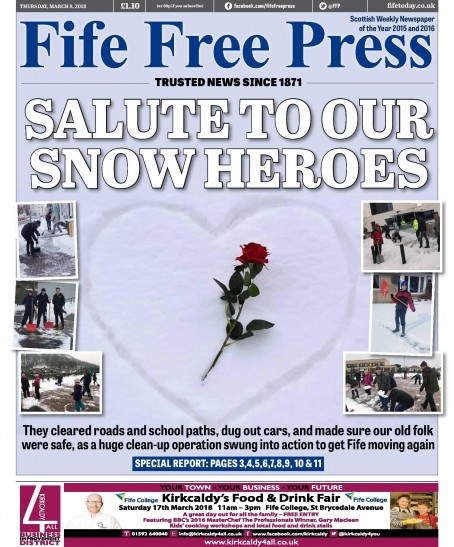 Editor Allan Crow told HTFP: “Reporter Debbie Clarke had the idea for the main image, and the pics of communities working to clear paths, schools etc were submitted across the week by our readers.

“We took a selection of them to tie in with the theme which was then collated by our design hub in Sheffield – Phil Smith did a smashing job on it.” 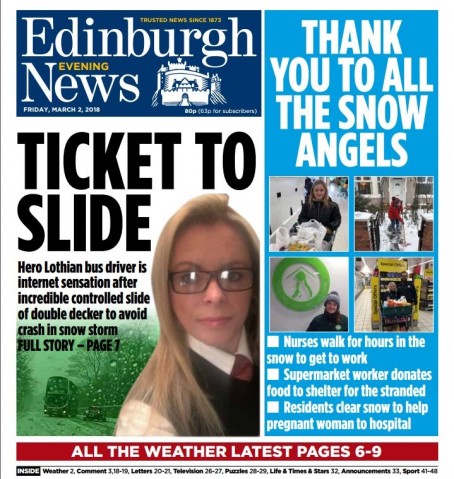 Allan added: “We were fortunate that our news team mainly stays local and were able to get to the office despite the atrocious weather – and we were in touch with a huge number of community groups and individuals who responded to our social media updates posted across each day as the weather worsened.

“Fife was at the centre of the red alert from the Met Office and it was the worst we have seen here for a good number of years. When the beach turns white and the harbour is snowed-in – where snow almost never lies – then you know it’s bad.”