A weekly newspaper has moved back to the street where it was founded 164 years ago in the latest of a series of office moves by its publisher.

Grantham Journal staff have moved into a new town centre office at 18 Watergate.

The property, previously a women’s fashionwear shop called Diva, was purchased by Iliffe Media last month and has since been refurbished using local contractors.

Previously the Journal had been based in rented accommodation, in a shared office block at St Peter’s Hill with no signage or public access. 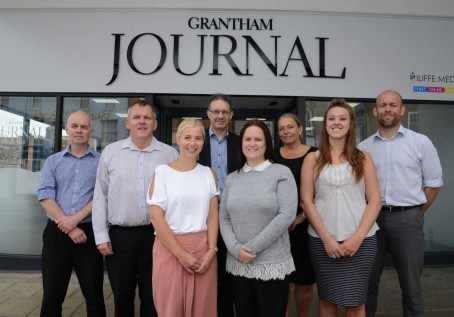 Journal staff outside their new office

The Journal was one of 13 Johnston Press titles bought by Iliffe in a £17m deal last year.

Since then, the company has moved a number of papers into new premises, including the Haverhill Echo and Lynn News, as well as reopening previously closed office receptions.

“It’s about making our newspapers as relevant and accessible as possible, to readers and advertisers: in print, online, on social media and in person. And we have had such a positive reaction to this move from the local community.”

Edward Iliffe, chief executive of Iliffe Media, added: “The opening of the new Grantham Journal office underlines our total commitment to the local communities we serve. Local newspapers will survive by being stronger, not weaker.

“Our heritage is as important as our future. In fact, it’s our foundation. One which we intend to build on.”