A museum exhibition and a specially brewed beer will be launched as part of a weekly newspaper’s 200th anniversary celebrations.

The Westmorland Gazette marks its bicentenary this year, having been first published on 23 May 1818.

Poet William Wordsworth wrote regular letters to the Gazette in its early years and an exhibition, ‘From Wordsworth to the Web: 200 years of The Westmorland Gazette’ will be held at the Museum of Lakeland Life and Industry at Kendal from April 2018.

In the same month, a special 200th anniversary beer called Wezzy Gezzy, which has been created by the Hawkshead Brewery, will go on sale in pubs across the Kendal-based paper’s patch. 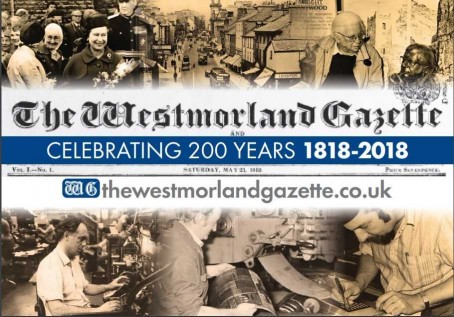 A commemorative supplement will also be published in May, while the title is posting a photograph from its archives online every day during 2018.

Editor Andrew Thomas said: “2018 promises to be a momentous and memorable year for the Westmorland Gazette.

“We have a range of special publications and events planned, both in-paper and online, to celebrate the newspaper’s important role in the local community over the past two centuries.

“We have huge regard for our loyal readers and advertisers and we hope they all share with us in celebrating this very special year in the history of their local newspaper.”