Part of an independent weekly’s headquarters is to be transformed into office space for start-up businesses – complete with its own brewery.

The New Milton Advertiser and Lymington Times has announced the launch of a business hub at its building, which it has set up as part of a bid to “secure its long-term future”.

The Advertiser and Times says the hub, which opens on next Thursday (8) and is known as IncuHive New Milton, will offer 21st century facilities for entrepreneurs, including a manufacturing lab, office space, and investment and mentoring opportunities.

Three organisations have already been lined up as paying members of the hub, which is being run in association with business space provider IncuHive. 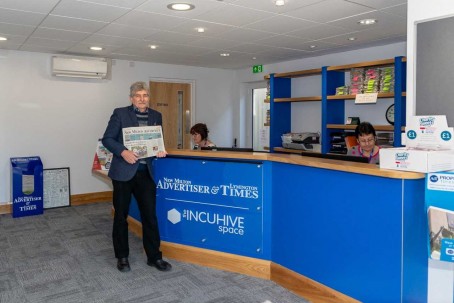 The manufacturing facility – where the A&T’s old black and white press used to be – is kitted out with items including fully-equipped work stations, a nano-brewery, 3D printer, lathes, and CNC embroidery.

A&T managing director Eddie Curry, one of four generations of the family involved in running the newspaper since 1930, said: “Despite the problems facing the newspaper industry, we are determined to keep providing our readers with high quality, well-funded local journalism.

“IncuHive New Milton will provide the financial support we need for the newspaper as well as giving valuable commercial opportunities for entrepreneurs, start-ups, established business and investors. We are very excited about the project and can’t wait for the launch.”

IncuHive chief executive Steve Northam said: “We are very excited for the launch of In-cuHive New Milton, which will be offering a huge range of services within our trademark creative and quirky co-working space set-up.

“We will be providing a range of office spaces, desk spaces, virtual offices and the new engineering fab lab will offer a really exciting range of facilities, not to mention the brewery. It’s going to be a lot of fun.”