A weekly newspaper is backing moves to protect the frontage of its “distinctive and beautiful” former offices.

The Wilts and Gloucestershire Standard closed its offices in Dyer Street, Cirencester at the end of 2017 with the remaining staff now based in Stroud or working remotely.

Now Cotswold District Council has served a special notice that ensures changes cannot be made to the building without a planning application.

Newsquest Media, which publishes the Standard and still owns the building, is supporting the move. 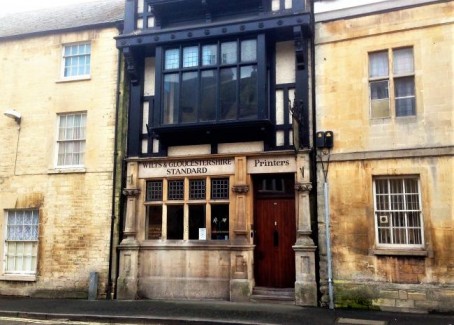 In a statement, the company said: “The Wilts and Gloucestershire Standard office is a landmark in Cirencester and worth protecting, particularly its prominent, stylised frontage.”

Mark MacKenzie-Charrington,the council’s cabinet member for heritage and design issues, added: “The council considers that 74 Dyer Street contributes very strongly to the character of the Conservation Area and the local townscape – visually, architecturally and historically.”

The building, which was built as a newspaper office in 1904, has been empty since the newspaper moved out.

It was was designed by VA Lawson, an influential local architect who was responsible for other important buildings in Cirencester, such as the former Bingham Library.