Weeklies go broadsheet for one week only to mark Armistice centenary

Two independent weeklies marked Armistice Day by switching from tabloid to broadsheet in order to replicate the look of their newspapers 100 years ago.

The Tameside Reporter and Glossop Chronicle moved from their traditional tabloid format to create a 40-page broadsheet edition in exactly the same style as the Reporter and Chronicle from the end of the First World War.

The one-off editions carried the ‘Great news of victory’ plus articles from 1914-1918 on left hand pages, while news from 2018 was carried on the right hand pages.

A percentage of advertising revenue from a special Poppy feature published in the edition will be donated to the Royal British Legion. 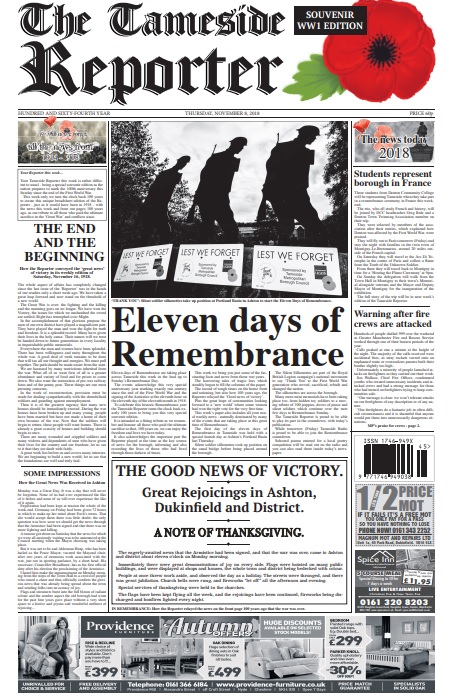 Editor Nigel Skinner said: “Everyone will have wanted to mark this 100th year of Remembrance in a special way and quite rightly so. But as we explored ideas I wanted this edition to be more than a souvenir supplement within our traditional weekly newspaper, but a souvenir edition in its own right.

“As we examined our extensive newspaper volumes which date back more than 160 years safely housed at our local libraries, it was the only natural conclusion to try and recreate our edition from November 1918 for our readers today.

“So it had to be a broadsheet – and it had to be mono – with the only colour being the red of the poppies on the page and with the front page headlines from then and now.”

Nigel thanked Reach Printing Services Ltd, in Oldham, for its help in bringing the editions to life.

He added: “It’s been a while since they’ve been asked to publish a broadsheet so we’re really grateful to them. The newspaper’s been really well received by our readers and we’ve had many messages of congratulations and appreciation across social media – although some newsagents did think it was an extra edition of the Telegraph being delivered.

“But perhaps most touchingly of all was an elderly lady in her 80s who called our newsdesk to say ‘thank you’ because we had reminded her of her childhood more than seven decades earlier when she recalled the paper looking exactly the same.

“We’d like to thank all of our advertisers too, agreeing to all of their advertisements appearing in black and white.

“They thought the idea was brilliant and some even took the opportunity to look back at 100 years of history of their own businesses.”

The Reporter was highly commended in the Weekly Newspaper and Community Publication categories at the 02 Media Awards North West on Thursday, while photographer Ray Liddy earned a Stand Out award for his contributions as a community newspaper photographer for 60 years service to the industry. 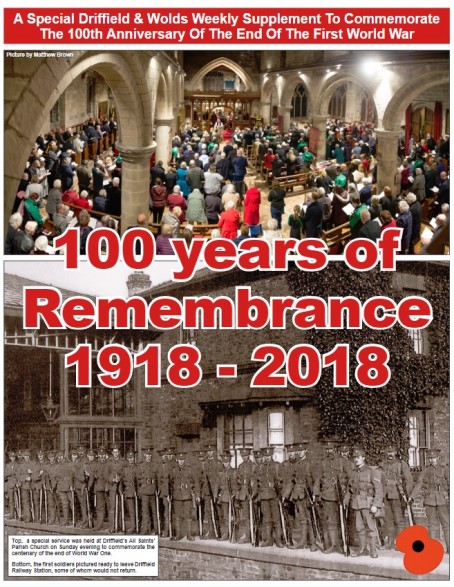 Elsewhere another independent weekly, the Driffield & Wolds Weekly, has beaten a tight deadline to produce a special publication featuring coverage from the commemorations.

Editor Andy Stabler said: “We knew we had very little time to put this together as we were going to print on Monday night, but our brilliant staff pulled out all the stops, with several attending various services themselves on Sunday.

“I know some supplements were done pre-Armistice when there was a bit more time available, but to turn this around in such a short period of time was very special. However, it was very important we covered Armistice locally in great detail as we did.

“I believe we produce the best weekly paper in the county, possibly the country, and I think this again shows why.”