An independent website founded to “fill the void of local news” after the closure of two newspapers on its patch has gone live for the first time.

The launch of online title the Bedford Independent was announced earlier this year, with its social media channels going live in August.

Now, having built up what the Independent describes as a “social reach in excess of 250,000 readers”, its full site has gone live with 165 stories already written.

Yesterday’s launch follows the closure of both Reach plc’s Bedfordshire on Sunday title, and its Bedfordshire Midweek successor, since 2017. 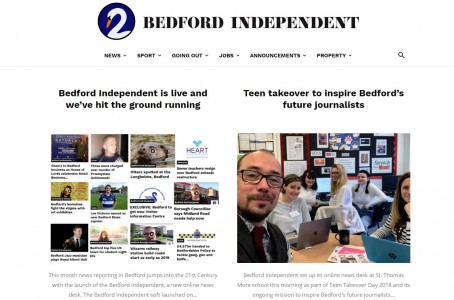 They are joined by commercial director Julia Course-Crofts, who has worked for titles including Bedfordshire on Sunday, MK on Sunday, Affinity Magazine and the Bedford Clanger during her 20-year career.

Said Paul: “We announced our plans in August, expecting a gradual incline of interest as we prepared for full launch. But the flood gates opened and we’ve been inundated with media releases and reader requests proving what we already knew, people in Bedford are crying out for a news desk that focusses on their town.

“Since then we’ve built an audience reach in excess of 250,000 people across social media, with an average active engagement rate of between 65pc and 75pc. We’ve pricked up ears and turned heads and there has been incredible enthusiasm and support for what we’re doing.”

“A big part of the problem facing local news provisions is investment in our future journalists. The Bedford Independent is committed to inspiring young writers to forge a career in news.

“We’ve already taken on two young writers, who are currently studying journalism, as freelancers and we’ve been working with Bedford College and local schools to develop workshops and projects for students interested in journalism.

Added Paul: “Research carried out by our team, Ofcom, and the Reuters Institute and Oxford University shows that the internet is the only news channel showing growth. What’s more it’s the second largest source of news across all demographics, with print being the least popular. It seems obvious that a brand-new news desk should be primarily online.

“That being said we cannot ignore the fact there are still people who prefer print or do not have regular access to the internet. We’ll therefore also be printing a monthly round up of our biggest and most popular news stories in the Bedford Clanger which is available at various locations across our patch.”