A vicar who has spent more than four decades writing for local newspapers says the regional press can be the “antidote” to the “fake news” phenomenon.

Rev Crumpler, associate minister at St Leonard’s Church, Sandridge, near St Albans, spoke of his own “passion” for local newspapers in his column for the Advertiser.

He called on people to “cherish organisations that enhance local life” in line with a call from Archbishop of Canterbury Justin Welby. 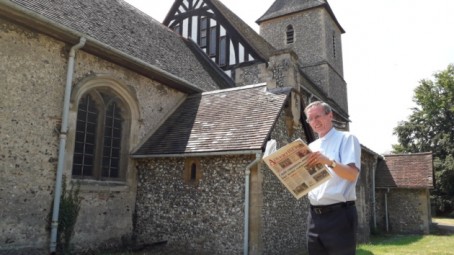 Rev Crumpler, pictured, wrote: “Local newspapers have a key role to play. Look through the Herts Ad in newsprint or online, and you’ll see news of what grassroots organisations are doing, helping them to recruit volunteers or raise funds.

“You’ll see local politicians being held to account and concerns of residents being aired and supported. In contrast, the lack of an effective local media meant the valid grievances of the Grenfell Tower residents went unheard.

“Churches and other faith groups play their part in local life too. Take the wide-ranging community, education and arts work at the Abbey, or how churches run food banks and other welfare projects.

“Relations between the church and the media can be difficult. Rightly, when the church has been slow to respond to wrongdoing, or fails to meet its own professed moral standards. But I want to declare my support for a strong, challenging and campaigning local media that stands up against fake news and disinformation.”

A report published ahead of the Cairncross Review, which is to be chaired by former economic journalist Dame Frances Cairncross, found last month that the number of frontline print journalists had decreased by 6,000 between 2007 and 2017, while more than 300 local newspapers had closed.

Rev Crumpler added: “I pray that the Government’s current review into the future of local and regional newspapers finds a way forward that protects accurate, truthful local news.

“A powerful antidote to fake news, and a champion for localism is in our hands and on our screens, on paper and digitally. Let’s all value it and help to promote its wellbeing.”