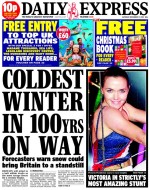 Newspaper publisher Trinity Mirror has today moved to calm a fresh bout of speculation about a takeover of Richard Desmond’s Express and Star titles.

According to reports over the weekend, TM is poised to secure a £125m deal for the publishing assets of Mr Desmond’s Northern & Shell group, which include the Daily Express, the Daily Star and their Sunday equivalents.

The proposed deal would see Mr Desmond acquire a minority stake in the enlarged TM which would then become the UK’s biggest national as well as regional publisher.

But in a statement to the Stock Exchgange this morning, TM has insisted there is “no certainty” that agreement will be reached.

It read: “Trinity Mirror plc notes the media speculation over the weekend about it acquiring certain assets of Northern & Shell.

“As previously announced, discussions are ongoing, but there can be no certainty that a deal will be agreed.”

The Northern & Shell group also includes OK magazine which Mr Desmond launched in 1993 before buying the Express & Star titles in 2000.

Discussions about a possible sale to TM have been going on for several years but have previously foundered on disagreements around price and pension deficits.