Tributes to deputy editor who later became a vicar 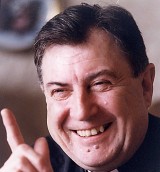 Tributes have been paid to a newspaper deputy editor who went on to become a priest.

Tony Fry, pictured, served as second in command at the Sheffield Telegraph and also as assistant editor of the Sheffield Star during a career in which he also worked in national newspapers and spent time as a news reader on BBC World at One.

He was known as a formidable feature writer who researched and wrote many powerful series, including one entitled ‘Secrets of Sheffield at War.’

He also helped pioneer the early development of Radio Sheffield before going on to teach at the city’s Stradbroke College, as well as serving as an Anglo-Catholic priest.

Darren Burke, digital journalist at the Doncaster Free Press and Sheffield daily The Star, was taught by Tony at Stradbroke in 1993-94.

Darren told HTFP: “He was a quirky and colourful lecturer, very much from the old school style of journalism, always immaculately dressed and keen to pass on his years of experience to us raw recruits.

“He’ll have taught hundreds of journalists in South Yorkshire during that era – and I’m sure many ex-Stradbroke students will be sad to learn of his passing.”

It is believed Tony was in either his late 70s or early 80s when he died.